Propene is an important synthetic industrial product predominantly formed by a methanol-to-olefins (MTO) catalytic process. Propene is known to form oligomers on zeolite catalysts, and paramters to separate it from mixtures and its diffusion properties are difficult to measure. Herein, we explored the adsorption–chemisorption behavior of propene by choosing SAPO-34 zeolites with three different degrees of acidity at various adsorption temperatures in an ultra-high-vacuum adsorption system. H-SAPO-34 zeolites were prepared by a hydrothermal method, and their structural, morphological, and acidic properties were investigated by XRD, SEM, EDX, and temperature-programmed desorption of ammonia (NH3-TPD) analysis techniques. The XRD analysis revealed the highly crystalline structure which posses cubic morphology as confirmed by SEM images. The analysis of adsorption of propene on SAPO-34 revealed that a chemical reaction (chemisorption) was observed between zeolite and propene at room temperature (RT) when the concentration of acidic sites was high (0.158 mmol/g). The reaction was negligible when the concentration of the acidic sites was low (0.1 mmol/g) at RT. However, the propene showed no reactivity with the highly acidic SAPO-34 at low temperatures, i.e., −56 °C (using octane + dry ice), −20 °C (using NaCl + ice), and 0 °C (using ice + water). In general, low-temperature conditions were found to be helpful in inhibiting the chemisorption of propene on the highly acidic H-SAPO-34 catalysts, which can facilitate propene separation and allow for reliable monitoring of kinetic parameters. View Full-Text
Keywords: zeolites; SAPO-34; catalytic mechanism; adsorption; separation; propene; catalysts regeneration zeolites; SAPO-34; catalytic mechanism; adsorption; separation; propene; catalysts regeneration
►▼ Show Figures 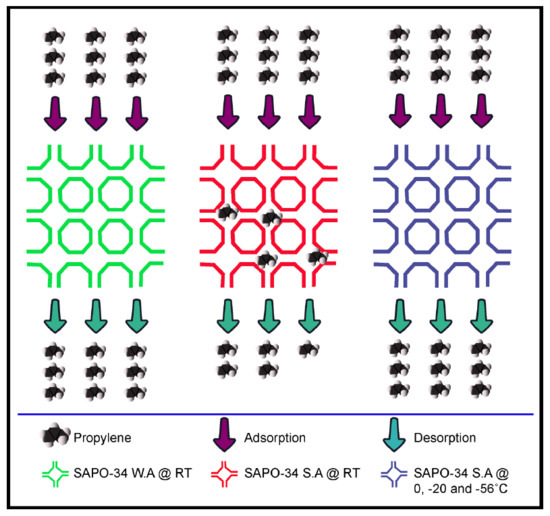