Carbamazepine (CBZ), a widely used pharmaceutical compound, is one of the most detected drugs in surface waters. The purpose of this work was to identify an active and durable catalyst, which, in combination with an ozonation process, could be used to remove CBZ and its degradation products. It was found that the CBZ was completely transformed after ozonation within the first minutes of the treatment. However, the resulting degradation products, 1-(2-benzaldehyde)-4-hydro-(1H,3H)-quinazoline-2-one (BQM) and 1-(2-benzaldehyde)-(1H,3H)-quinazoline-2,4-dione (BQD), were more resistant during the ozonation process. The formation and degradation of these products were studied in more detail and a thorough catalytic screening was conducted to reveal the reaction kinetics of both the CBZ and its degradation products. The work was performed by non-catalytic ozonation and with six different heterogeneous catalysts (Pt-MCM-41-IS, Ru-MCM-41-IS, Pd-H-Y-12-EIM, Pt-H-Y-12-EIM, Pd-H-Beta-300-EIM and Cu-MCM-41-A-EIM) operating at two temperatures 20 °C and 50 °C. The influence of temperature on degradation kinetics of CBZ, BQM and BQD was studied. The results exhibited a notable difference in the catalytic behavior by varying temperature. The higher reactor temperature (50 °C) showed a higher activity of the catalysts but a lower concentration of dissolved ozone. Most of the catalysts exhibited higher removal rate for BQM and BQD compared to non-catalytic experiments in both temperatures. The Pd-H-Y-12-EIM catalyst illustrated a higher degradation rate of by-products at 50 °C compared to other catalysts. View Full-Text
Keywords: carbamazepine; ozone; zeolites; catalysts synthesis and characterization; catalytic ozonation carbamazepine; ozone; zeolites; catalysts synthesis and characterization; catalytic ozonation
►▼ Show Figures 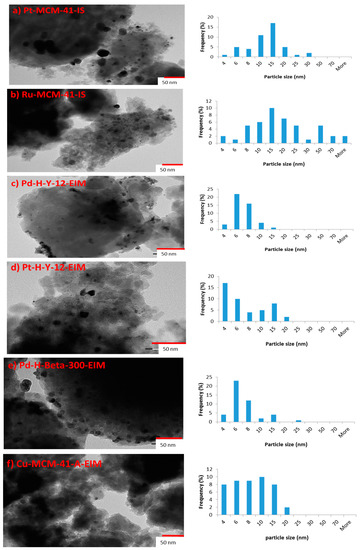