Representing Others in a Public Good Game

The experiment is designed to compare the choices of individuals in inter-individual public goods with the choices of the same individuals acting as group representatives who decide on behalf of their group in inter-group public good games. The experiment has a within-subject comparison of decisions made by individuals and representatives, and a between-subject comparison of the impact of gender and anonymity.
An example can illustrate the decision environments in inter-individual public goods and inter-group public goods. In the inter-individual public good setting, three persons collaborate on a group project and must each decide how much effort they themselves will put into the project. In the inter-group public good setting, the three individuals are replaced by three groups with three persons in each group. The three groups collaborate on a common group project, and a representative from each of the three groups meet and decides how much effort his or her team will put into the group project.
Before we present the procedures of the experiment, we will present the details of these two public good settings.

The inter-individual public good game was a standard linear three-person public good game [27]. Participants were given an endowment of 60 Norwegian kroner (NOK) (~$10). The game was explained using the concept of a “doubling bucket”. The three members of a group shared a doubling bucket, and each subject could decide how much of his or her endowment to put in the doubling bucket and how much to keep. All money placed in the bucket was doubled and divided equally between the group members, giving the monetary payoff function provided in Equation (1) below. Subjects made simultaneous-move contributions to the doubling bucket, stated as shares of the endowment in 10% increments.
where is individual i’s contribution as share of the endowment .
Since contributions give a return of 2/3, the Nash equilibrium in the absence of social preferences consists of no contributions and each participant getting a payoff of .

Your task is to answer the following question: How much of your group’s money do you want to put in the bucket on behalf of yourself and the two others in your group?

The contributions were stated as shares of the group’s total endowment in 10% increments. By design, therefore, all three members of each group contributed the same amount.
All money placed in the bucket was doubled, and split equally between the total of nine members in the three groups sharing the bucket. The payoff function for group representative i is presented in Equation (2) below.
where is the contribution share decision on behalf of group g stated as percentage of the group’s total endowment .
The inter-group public good game is a scaled up version of the inter-individual public good game. The per-capita return to the public good is by construction identical between that of the inter-individual and the inter-group public good, so is the Nash Equilibrium in the absence of social preferences.

The experiment consisted of four sessions and was conducted at the University of Oslo. Each session included 27 subjects, adding up to a total of 108 subjects and 324 contribution decisions. Each subject participated only once. The subjects were recruited from lectures attended by first-year students from a number of faculties of science at the University of Oslo, Norway. Fifty (46.3%) of the subjects were female. The distribution of subjects across sessions is presented in Table 1. The experiment was programmed in z-tree [28].

In this section we present the behavior observed in the experiment and examine whether subjects behaved differently as individuals compared to as representatives. In particular we examine whether the difference in behavior as individuals and representatives differs between men and women.
As with any experiment with a within-subject design, there is a possibility of order effects. The design of the experiment, where choice 1 and 3 were identical treatments (see Figure 1 for the design of the experiment), allows us to test for and if necessary correct for potential order effects. A paired t-test found signs of systematic differences: the third contribution choice averaged 6 percentage points lower than the first choice, a difference that was significant at the 10% level (p = 0.095). For this reason, controls for the choice number (choice 1, 2 or 3) within a session are used in the regression results reported below. 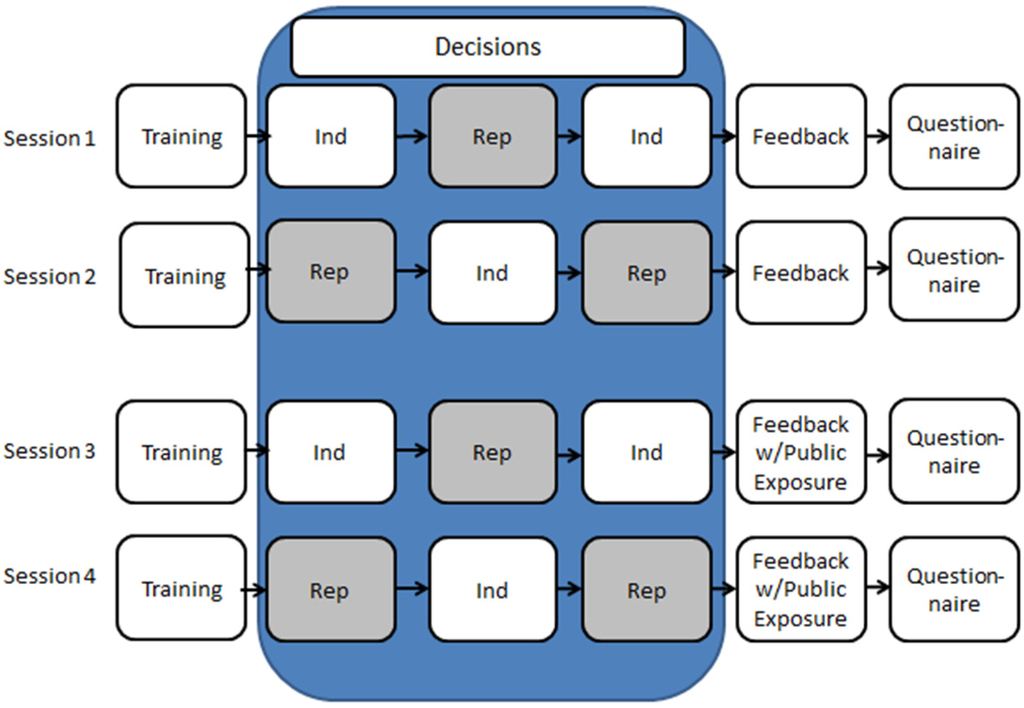 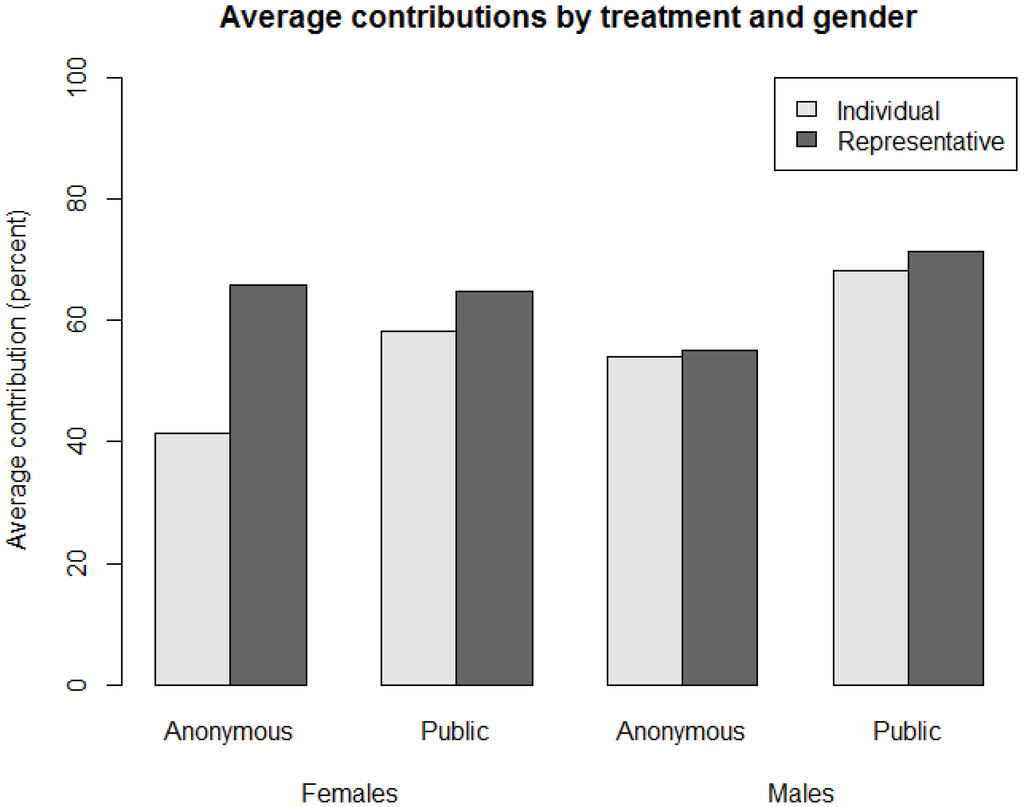 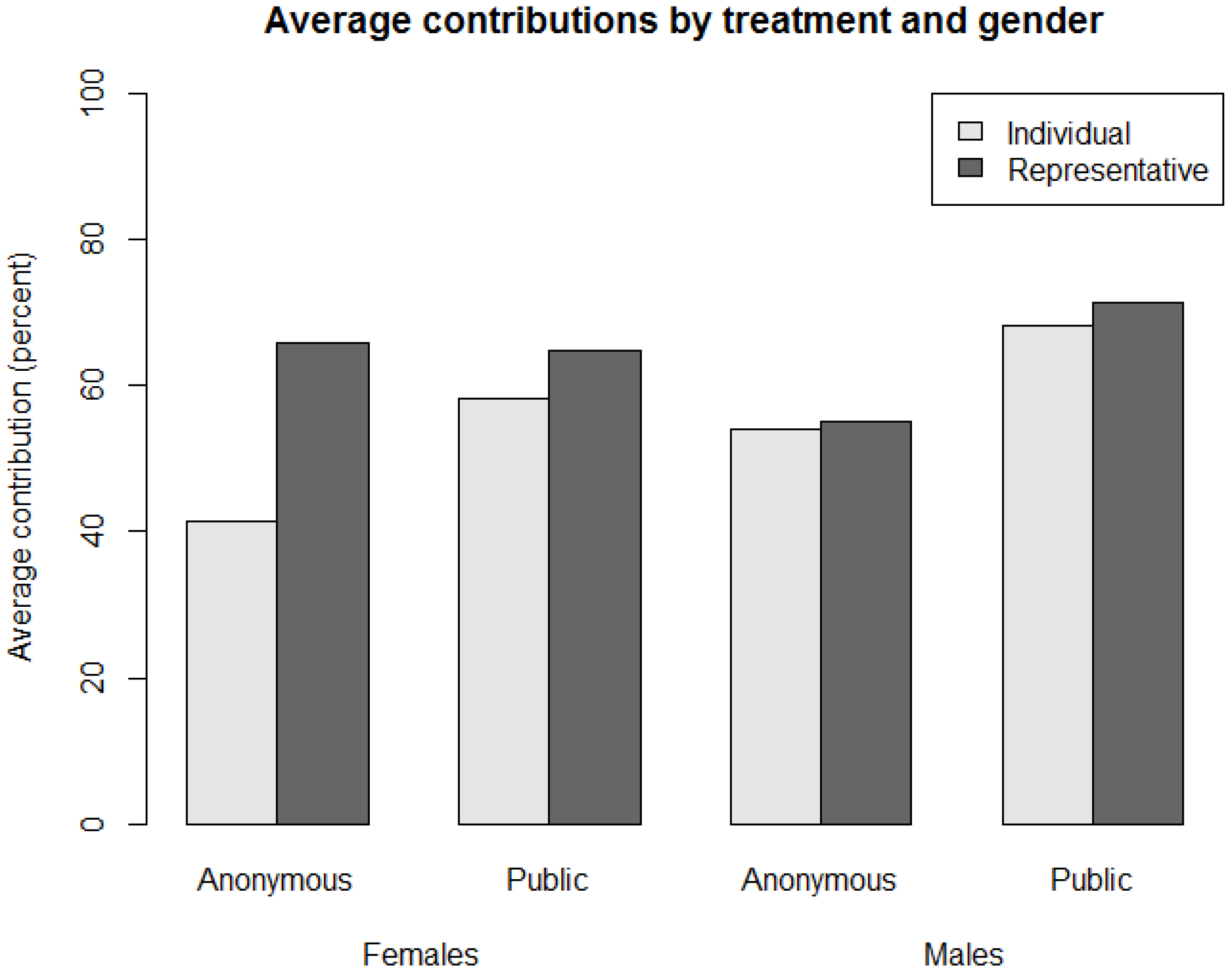 This project was funded by the Research Council of Norway, grant number 193703. While carrying out this research, the authors have been associated with CREE—Oslo Centre for Research on Environmentally friendly Energy. We are grateful for valuable comments from Kjell Arne Brekke, Ragnhild Haugli Bråten, Åshild Auglænd Johnsen, Jo Thori Lind and Hans Olav Melberg on earlier drafts; and to Ragnhild Haugli Bråten and Espen Stokkereit for research assistance.

Both authors contributed equally to this article.