With the expansion in the number of devices that connect to the Internet, a new area, known as the Internet of Things (IoT), appears. It was necessary to migrate the IPv4 protocol by the IPv6 protocol, due to the scarcity of IPv4 addresses. One of the advances of IPv6 concerning its predecessor was the Path MTU Discovery protocol, in which this work aims to demonstrate its effectiveness in a virtual environment. Employing the VirtualBox virtualization program, a scenario is defined with fifteen machines with the Debian operating system and two network scenarios, one using the IPv4 network configuration and the other using the IPv6 network configuration. In both situations, the MTU values of all machines were changed to perform the performance tests while using UDP transport traffic. The fragmentation of packets demonstrated the effectiveness of the Path MTU Discovery protocol. The results achieved point to a stabilization in bandwidth and jitter when Path MTU Discovery is used and to change when it is no longer applied, proving its effectiveness. View Full-Text
Keywords: MTU; IPv4; IPv6 MTU; IPv4; IPv6
►▼ Show Figures 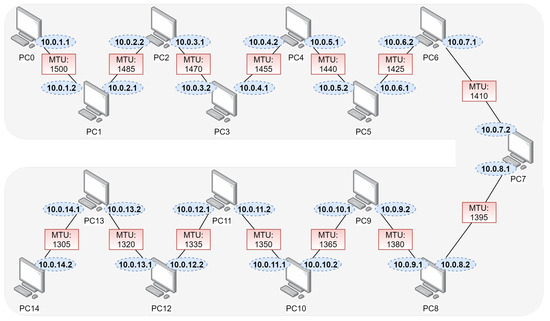