Background: Guidelines recommend a perioperative approach in patients with stage II/III gastric cancer, but in real-life many patients receive immediate surgery followed by adjuvant chemotherapy (aCT). Although histologic subtypes may have different response to CT, no study has explored the influence of histotype on the efficacy of perioperative CT (pCT) or aCT. Materials and methods: The objective of the study was to evaluate the impact of clinicopathological features and histology (intestinal or diffuse) on survival according to strategy (pCT vs. aCT). The primary endpoint was overall survival (OS) and the secondary endpoint was event-free survival (EFS). Results: Out of 203 patients affected by LAGC, 83 received pCT and 120 aCT. At multivariate, histology and LVI in pCT cohort and positive resection margin in the aCT influenced both OS and EFS. No difference in EFS and OS was observed in relation to strategy. However, in the intestinal-type of pCT cohort survival outcomes were significantly higher compared to the aCT cohort, whereas in the diffuse-type were significantly worse in patients receiving pCT compared to those receiving aCT. Conclusions: Although retrospective and small-sized, this study suggests that the benefit of pCT might be limited to the intestinal-type. This hypothesis needs to be confirmed in prospective series. View Full-Text
Keywords: gastric cancer; diffuse histology; intestinal histology; neo-adjuvant therapy; perioperative therapy; adjuvant therapy gastric cancer; diffuse histology; intestinal histology; neo-adjuvant therapy; perioperative therapy; adjuvant therapy
►▼ Show Figures 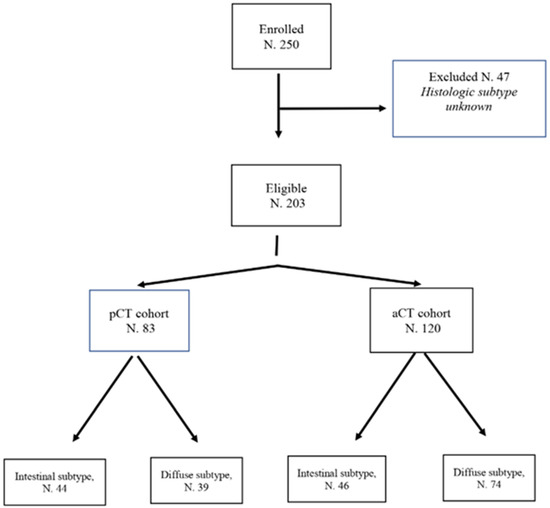