A randomized clinical trial showed that trastuzumab, added to traditional chemotherapy, significantly improved overall survival in human epidermal growth factor receptor 2 (HER2)-overexpressing metastatic gastric cancer patients. This population-based study aimed at evaluating both the clinical and economic impact of trastuzumab in a real-world setting. By using the healthcare utilization databases of Lombardy, Italy, a cohort of patients newly diagnosed with metastatic gastric cancer during the period 2011–2016 was selected. Among these, patients initially treated with either trastuzumab-based chemotherapy or standard chemotherapy alone were followed up until death, migration in other regions or June 2018. Overall survival and average cumulative costs were estimated and compared between the two treatment arms. Among the 1198 metastatic gastric cancer patients who started therapy within six months after metastasis detection, 87 were initially treated with trastuzumab-based chemotherapy and 1111 with standard chemotherapy. Median overall survival and restricted mean survival were 10.2 and 7.4 months, and 14.9 and 11.4 months, respectively, in the two treatment arms. The adjusted hazard ratio of death was 0.73 (95% CI 0.57–0.93). The average per capita cumulative healthcare costs were, respectively, EUR 39,337 and 26,504, corresponding to an incremental cost-effectiveness ratio of EUR 43,998 for each year of survival gained. Our study shows that adding trastuzumab to conventional chemotherapy is effective and cost-effective. View Full-Text
Keywords: gastric cancer; trastuzumab; overall survival; real-word evidence; cost-effectiveness gastric cancer; trastuzumab; overall survival; real-word evidence; cost-effectiveness
►▼ Show Figures 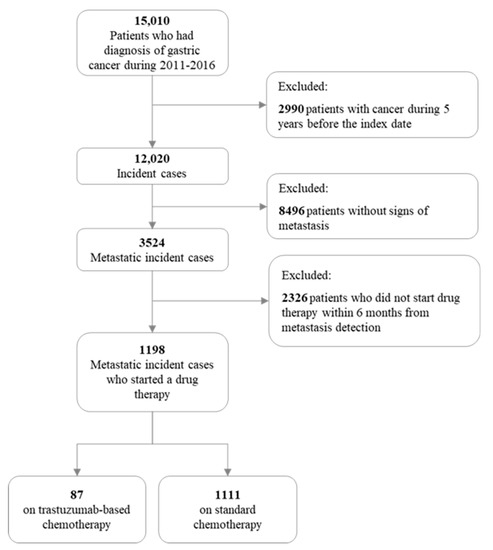