Few studies have assessed the benefits of androgen deprivation therapy (ADT) in men with metastatic prostate cancer (PC; mPC) at an old age or with major cardiovascular conditions. A retrospective cohort consisted of 3835 men with newly diagnosed mPC from the Taiwan Cancer Registry of 2008–2014. Among them, 2692 patients received only ADT in the first year after the cancer diagnosis, and 1143 patients were on watchful waiting. The inverse probability of treatment-weighted Cox model was used to estimate the effects of ADT on all-cause mortality and PC-specific mortality according to age, and the status of congestive heart failure (CHF), coronary arterial diseases (CADs), and stroke at the baseline. After a median follow-up of 2.65 years, 1650 men had died. ADT was associated with a 17–22% risk reduction in all-cause and PC-specific mortality in men without stroke, CAD, or CHF in the 65–79-year group. The survival benefit diminished in men with any of these preexisting conditions. In contrast, ADT was not found to be associated with any survival benefit in the ≥80-year group, even though they did not present with any major cardiovascular disease at the baseline. Patients who had CHF, CAD, or stroke at the baseline did not show a survival benefit following ADT in any of the age groups. Men who have preexisting major cardiovascular diseases or are ≥80 years do not demonstrate a survival benefit from ADT for mPC. The risk–benefit ratio should be considered when using ADT for mPC in older men especially those with major cardiovascular comorbidities. View Full-Text
Keywords: prostate cancer; androgen deprivation therapy; survival; cardiovascular diseases; age prostate cancer; androgen deprivation therapy; survival; cardiovascular diseases; age
►▼ Show Figures 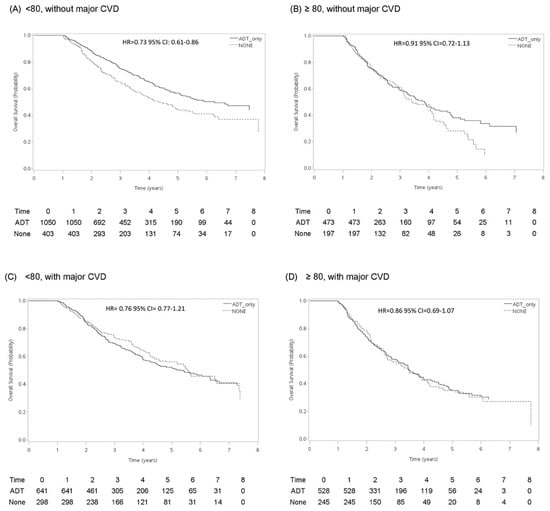