Priority Actions and Progress to Substantially and Sustainably Reduce the Mortality, Morbidity and Socioeconomic Burden of Tropical Snakebite
Previous Article in Special Issue

Seed contamination with polyketide mycotoxins such as sterigmatocystin (ST) produced by Aspergilli is a worldwide issue. The ST biosynthetic pathway is well-characterized in A. nidulans, but regulatory aspects related to the carbon source are still enigmatic. This is particularly true for lactose, inasmuch as some ST production mutant strains still synthesize ST on lactose but not on other carbon substrates. Here, kinetic data revealed that on d-glucose, ST forms only after the sugar is depleted from the medium, while on lactose, ST appears when most of the carbon source is still available. Biomass-specified ST production on lactose was significantly higher than on d-glucose, suggesting that ST formation may either be mediated by a carbon catabolite regulatory mechanism, or induced by low specific growth rates attainable on lactose. These hypotheses were tested by d-glucose limited chemostat-type continuous fermentations. No ST formed at a high growth rate, while a low growth rate led to the formation of 0.4 mg·L−1 ST. Similar results were obtained with a CreA mutant strain. We concluded that low specific growth rates may be the primary cause of mid-growth ST formation on lactose in A. nidulans, and that carbon utilization rates likely play a general regulatory role during biosynthesis. View Full-Text
Keywords: Aspergillus nidulans; sterigmatocystin; lactose; d-glucose; CreA; growth rate Aspergillus nidulans; sterigmatocystin; lactose; d-glucose; CreA; growth rate
►▼ Show Figures 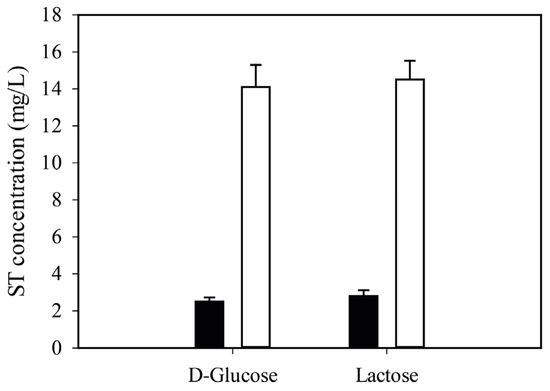