In Silico Approach Gives Insights into Ig-like Fold Containing Proteins in Vibrio parahaemolyticus: A Focus on the Fibrillar Adhesins
Previous Article in Journal

Glutathione S-transferases are a family of detoxifying enzymes that catalyze the conjugation of reduced glutathione (GSH) with different xenobiotic compounds using either Ser, Tyr, or Cys as a primary catalytic residue. We identified a novel GST in the genome of the shrimp pathogen V. parahaemolyticus FIM- S1708+, a bacterial strain associated with Acute Hepatopancreatic Necrosis Disease (AHPND)/Early Mortality Syndrome (EMS) in cultured shrimp. This new GST class was named Gtt2. It has an atypical catalytic mechanism in which a water molecule instead of Ser, Tyr, or Cys activates the sulfhydryl group of GSH. The biochemical properties of Gtt2 from Vibrio parahaemolyticus (VpGSTT2) were characterized using kinetic and crystallographic methods. Recombinant VpGSTT2 was enzymatically active using GSH and CDNB as substrates, with a specific activity of 5.7 units/mg. Low affinity for substrates was demonstrated using both Michaelis–Menten kinetics and isothermal titration calorimetry. The crystal structure showed a canonical two-domain structure comprising a glutathione binding G-domain and a hydrophobic ligand H domain. A water molecule was hydrogen-bonded to residues Thr9 and Ser 11, as reported for the yeast Gtt2, suggesting a primary role in the reaction. Molecular docking showed that GSH could bind at the G-site in the vicinity of Ser11. G-site mutationsT9A and S11A were analyzed. S11A retained 30% activity, while T9A/S11A showed no detectable activity. VpGSTT2 was the first bacterial Gtt2 characterized, in which residues Ser11 and Thr9 coordinated a water molecule as part of a catalytic mechanism that was characteristic of yeast GTT2. The GTT2 family has been shown to provide protection against metal toxicity; in some cases, excess heavy metals appear in shrimp ponds presenting AHPND/EMS. Further studies may address whether GTT2 in V. parahaemolyticus pathogenic strains may provide a competitive advantage as a novel detoxification mechanism. View Full-Text
Keywords: glutathione s-transferase (GST); Vibrio parahaemolyticus; Gtt2 class; glutathione (GSH); kinetic isotope effect; crystal structure glutathione s-transferase (GST); Vibrio parahaemolyticus; Gtt2 class; glutathione (GSH); kinetic isotope effect; crystal structure
►▼ Show Figures 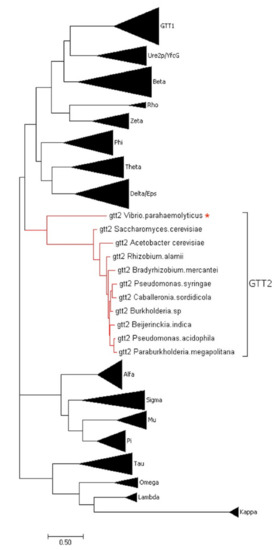