The pufferfish Takifugu niphobles (at present Takifugu alboplumbeus) possesses highly concentrated tetrodotoxin (TTX), an extremely potent neurotoxin that provides effective protection from predators, at least at the larval stages. However, the source of the toxin has remained unclear. Recently, DNA from the toxic flatworm Planocera multitentaculata was detected in the intestinal contents of juveniles and young of the pufferfish, suggesting that the flatworm contributes to its toxification at various stages of its life. In this study, we describe the behavior of the pufferfish in the intertidal zone that appears to contribute to its toxification before and during its spawning period: pufferfish were found to aggregate and ingest flatworm egg plates by scraping them off the surface of rocks. DNA analysis based on 28S rRNA and cytochrome c oxidase subunit I (COI) genes identified the egg plates as those of P. multitentaculata. Liquid chromatography with tandem mass spectrometry analysis revealed that the egg plates contain highly concentrated TTX. The feeding behavior of the pufferfish on the flatworm egg plates was also observed in the aquarium. These results suggest that pufferfish feed on the flatworm egg plate, which enables them to acquire toxicity themselves while providing their offspring with the protective shield of TTX. View Full-Text
Keywords: egg plates; flatworm; Planocera multitentaculata; pufferfish; tetrodotoxin (TTX) egg plates; flatworm; Planocera multitentaculata; pufferfish; tetrodotoxin (TTX)
►▼ Show Figures 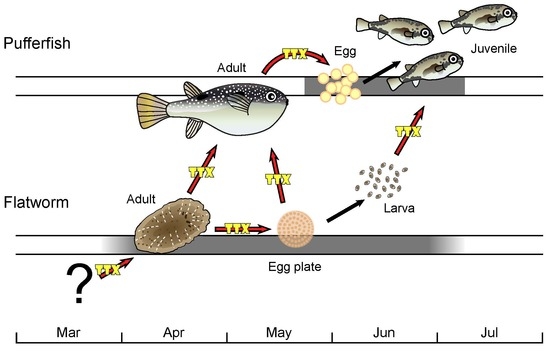