Exploring the Role of Staphylococcus Aureus Toxins in Atopic Dermatitis

Staphylococcus aureus (SA) infections cause high mortality and morbidity in humans. Being central to its pathogenesis, S. aureus thwarts the host defense by secreting a myriad of virulence factors, including bicomponent, pore-forming leukotoxins. While all vaccine development efforts that aimed at achieving opsonophagocytic killing have failed, targeting virulence by toxoid vaccines represents a novel approach to preventing mortality and morbidity that are caused by SA. The recently discovered leukotoxin LukAB kills human phagocytes and monocytes and it is present in all known S. aureus clinical isolates. While using a structure-guided approach, we generated a library of mutations that targeted functional domains within the LukAB heterodimer to identify attenuated toxoids as potential vaccine candidates. The mutants were evaluated based on expression, solubility, yield, biophysical properties, cytotoxicity, and immunogenicity, and several fully attenuated LukAB toxoids that were capable of eliciting high neutralizing antibody titers were identified. Rabbit polyclonal antibodies against the lead toxoid candidate provided potent neutralization of LukAB. While the neutralization of LukAB alone was not sufficient to fully suppress leukotoxicity in supernatants of S. aureus USA300 isolates, a combination of antibodies against LukAB, α-toxin, and Panton-Valentine leukocidin completely neutralized the cytotoxicity of these strains. These data strongly support the inclusion of LukAB toxoids in a multivalent toxoid vaccine for the prevention of S. aureus disease. View Full-Text
Keywords: Leukocidin; Staphylococcus aureus; LukAB; LukGH; toxin neutralization; polyclonal antibody; toxoid vaccine Leukocidin; Staphylococcus aureus; LukAB; LukGH; toxin neutralization; polyclonal antibody; toxoid vaccine
►▼ Show Figures 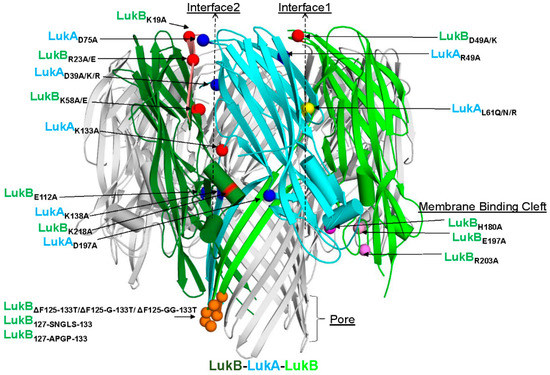