Interactive Effects of [CO2] and Temperature on Plant Chemistry of Transgenic Bt Rice and Population Dynamics of a Non-Target Planthopper, Nilaparvata lugens (Stål) under Different Levels of Soil Nitrogen
Previous Article in Journal

Michael B. Blackburn 4 and

The Asian citrus psyllid (ACP), Diaphorina citri Kuwayama (Hemiptera), is an important pest of citriculture. The ACP vectors a bacterium that causes huanglongbing (HLB), a devastating and incurable disease of citrus. The bacterium Bacillus thuringiensis (Bt) produces multiple toxins with activity against a diverse range of insects. In efforts to provide additional control methods for the ACP vector of HLB, we identified pesticidal proteins derived from Bt for toxicity against ACP. The trypsin proteolytic profiles of strain-derived toxins were characterized. Strain IBL-00200, one of six strains with toxins shown to have basal activity against ACP was selected for liquid chromatography-mass spectrometry (LC-MS/MS) identification of the individual Cry toxins expressed. Toxicity assays with individual toxins derived from IBL-00200 were then performed. The activated form of the Cry toxins Cry1Ab and Cry1Ba were toxic to ACP with LC50 values of approximately 120 µg/mL. Disruption of the midgut epithelium was associated with the toxicity of both the IBL-00200-derived toxin mixture, and with Cry1Ba. With further optimization of the efficacy of Cry1Ab and Cry1Ba, these toxins may have practical utility against ACP. Bt toxins with activity against ACP may provide an additional tool for management of ACP and the associated HLB disease, thereby providing a more sustainable and environmentally benign approach than repeated application of broad-spectrum insecticides. View Full-Text
Keywords: Asian citrus psyllid; Bacillus thuringiensis; pesticidal protein; toxin; gut epithelium Asian citrus psyllid; Bacillus thuringiensis; pesticidal protein; toxin; gut epithelium
►▼ Show Figures 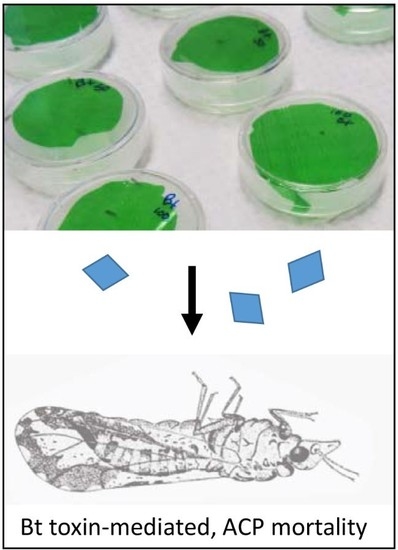