To understand the diversity of scorpion venom, RNA from venomous glands from a sawfinger scorpion, Serradigitus gertschi, of the family Vaejovidae, was extracted and used for transcriptomic analysis. A total of 84,835 transcripts were assembled after Illumina sequencing. From those, 119 transcripts were annotated and found to putatively code for peptides or proteins that share sequence similarities with the previously reported venom components of other species. In accordance with sequence similarity, the transcripts were classified as potentially coding for 37 ion channel toxins; 17 host defense peptides; 28 enzymes, including phospholipases, hyaluronidases, metalloproteases, and serine proteases; nine protease inhibitor-like peptides; 10 peptides of the cysteine-rich secretory proteins, antigen 5, and pathogenesis-related 1 protein superfamily; seven La1-like peptides; and 11 sequences classified as “other venom components”. A mass fingerprint performed by mass spectrometry identified 204 components with molecular masses varying from 444.26 Da to 12,432.80 Da, plus several higher molecular weight proteins whose precise masses were not determined. The LC-MS/MS analysis of a tryptic digestion of the soluble venom resulted in the de novo determination of 16,840 peptide sequences, 24 of which matched sequences predicted from the translated transcriptome. The database presented here increases our general knowledge of the biodiversity of venom components from neglected non-buthid scorpions. View Full-Text
Keywords: proteome; Serradigitus gertschi; scorpion; transcriptome; venom proteome; Serradigitus gertschi; scorpion; transcriptome; venom
►▼ Show Figures 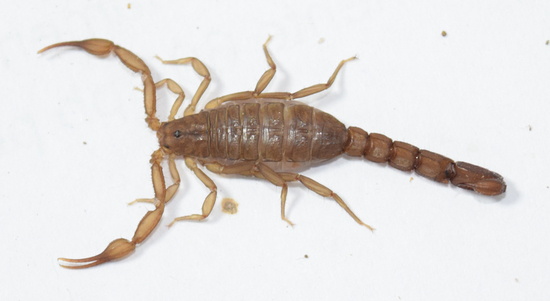