Fusarium head blight (FHB) of cereals is the major head disease negatively affecting grain production worldwide. In 2016 and 2017, serious outbreaks of FHB occurred in wheat crops in Poland. In this study, we characterized the diversity of Fusaria responsible for these epidemics using TaqMan assays. From a panel of 463 field isolates collected from wheat, four Fusarium species were identified. The predominant species were F. graminearum s.s. (81%) and, to a lesser extent, F. avenaceum (15%). The emergence of the 15ADON genotype was found ranging from 83% to 87% of the total trichothecene genotypes isolated in 2016 and 2017, respectively. Our results indicate two dramatic shifts within fungal field populations in Poland. The first shift is associated with the displacement of F. culmorum by F. graminearum s.s. The second shift resulted from a loss of nivalenol genotypes. We suggest that an emerging prevalence of F. graminearum s.s. may be linked to boosted maize production, which has increased substantially over the last decade in Poland. To detect variation within Tri core clusters, we compared sequence data from randomly selected field isolates with a panel of strains from geographically diverse origins. We found that the newly emerged 15ADON genotypes do not exhibit a specific pattern of polymorphism enabling their clear differentiation from the other European strains. View Full-Text
Keywords: Fusarium; Fusarium head blight; trichothecenes; genotypes; Tri core cluster; qPCR; wheat Fusarium; Fusarium head blight; trichothecenes; genotypes; Tri core cluster; qPCR; wheat
►▼ Show Figures 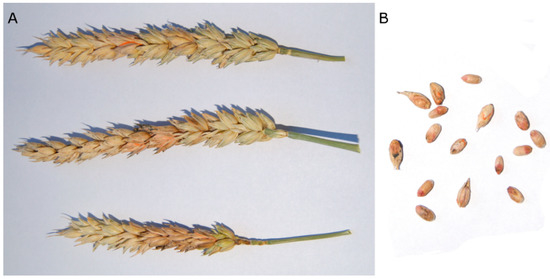