Reduced Glutathione: A Radioprotector or a Modulator of DNA-Repair Activity?

The tripeptide glutathione (GSH) is the most abundant intracellular nonprotein thiol, and it is involved in many cellular functions including redox-homeostatic buffering. Cellular radiosensitivity has been shown to be inversely correlated to the endogenous level of GSH. On the other hand, controversy is raised with respect to its role in the field of radioprotection since GSH failed to provide consistent protection in several cases. Reports have been published that DNA repair in cells has a dependence on GSH. Subsequently, S-glutathionylation (forming mixed disulfides with the protein–sulfhydryl groups), a potent mechanism for posttranslational regulation of a variety of regulatory and metabolic proteins when there is a change in the celluar redox status (lower GSH/GSSG ratio), has received increased attention over the last decade. GSH, as a single agent, is found to affect DNA damage and repair, redox regulation and multiple cell signaling pathways. Thus, seemingly, GSH does not only act as a radioprotector against DNA damage induced by X-rays through glutathionylation, it may also act as a modulator of the DNA-repair activity. Judging by the number of publications within the last six years, it is obvious that the field of protein glutathionylation impinges on many aspects of biology, from regulation of protein function to roles of cell cycle and apoptosis. Aberrant protein glutathionylation and its association with cancer and other diseases is an area of increasing interest. View Full-Text
Keywords: glutathione; radioprotector; glutathionylation; chromosome aberrations; DNA repair glutathione; radioprotector; glutathionylation; chromosome aberrations; DNA repair
►▼ Show Figures 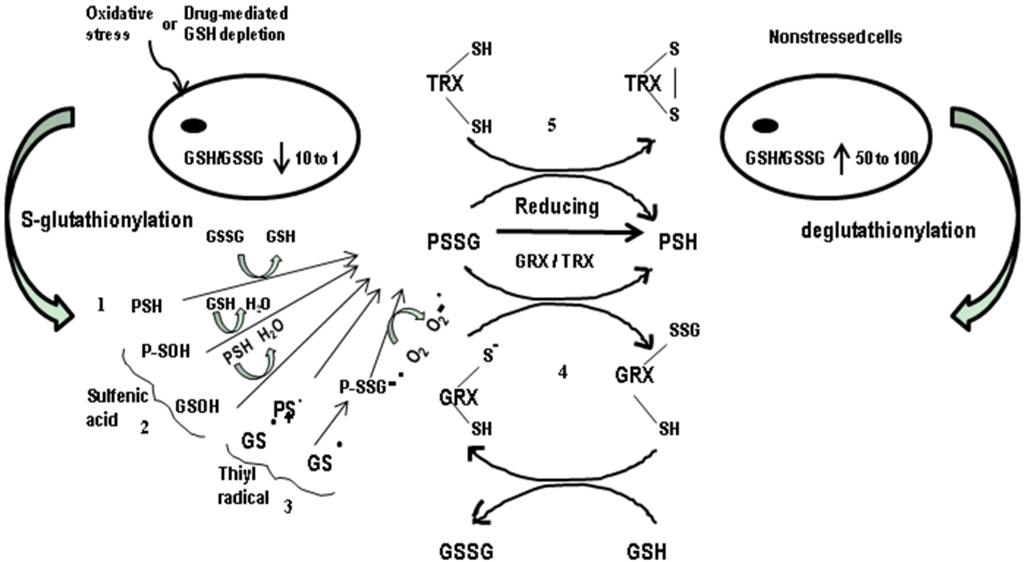 Chatterjee, A. Reduced Glutathione: A Radioprotector or a Modulator of DNA-Repair Activity? Nutrients 2013, 5, 525-542.