Snow in the mountainous watersheds of the Tarim River Basin is the primary source of water for western China. The Snow Cover Daily L3 Global 500-m Grid (MOD10A1) remote sensing dataset has proven extremely valuable for monitoring the changing snow cover patterns over large spatial areas; however, inherent uncertainty associated with large sensor zenith angles (SZAs) has called its reliability into question. Comparative analysis that utilized a paired-date difference method for parameters such as snow cover frequency, snow cover percentage, and normalized difference snow index (NDSI) has shown that overestimation of snow cover in the Tarim River Basin correlates with high values of SZA. Hence, such overestimation was associated with an increase in the NDSI, attributable to the change in reflectance between Band 4 and Band 6 imagery. A maximum threshold value of SZA of 22.37° was used alongside a multiday refilling method to modify the MOD10A1 dataset to produce a new daily snow cover map of the Tarim River Basin, spanning a 10-year period. A comparison of benchmark results of snow cover classification produced by the HJ-1A/B satellite revealed an increase in the overall accuracy of up to 4%, confirming the usefulness of our modified MOD10A1 data. View Full-Text
Keywords: MOD10A1; sensor zenith angles (SZA); snow cover overestimation; Tarim River Basin; HJ-1A/B MOD10A1; sensor zenith angles (SZA); snow cover overestimation; Tarim River Basin; HJ-1A/B
►▼ Show Figures 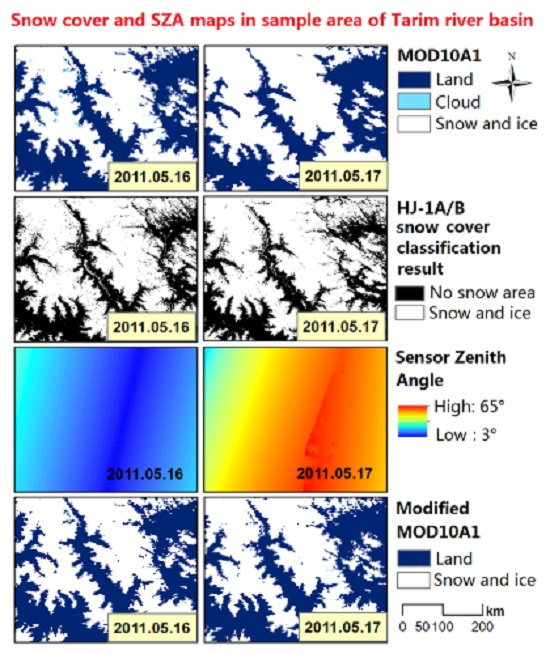