The Defense Meteorological Satellite Program (DMSP)’s Operational Line-scan System (OLS) stable nighttime light (NTL) imagery offers a good opportunity for characterizing the extent and dynamics of urban development at the global and regional scales. However, their ability to characterize intra-urban variation is limited due to saturation and blooming of the data values. In this study, we adopted the methods of Mann-Kendall and linear regression to analyze urban dynamics from time series Vegetation Adjusted NTL Urban Index (VANUI) data from 1992 to 2013 in the Southeast United States of America (U.S.A.), which is one of the fastest growing regions in the nation. The newly built urban areas were effectively detected based on the trend analysis. In addition, the VANUI-derived urban areas with an optimal threshold method were found highly consistent with the Landsat-derived National Land Cover Database. The total urbanized areas in large metropolitan areas in southeastern U.S.A. increased from 8524 km2 in 1992 to 14,684 km2 in 2010, accounting for 5% and 9% of the total area, respectively. The results further showed that urban expansion in the region cannot be purely explained by population growth. Our results suggested that the VANUI time series provided an effective method for characterizing the spatiotemporal dynamics of urban extent at the regional scale. View Full-Text
Keywords: DMSP/OLS; urban areas; vegetation adjusted nighttime light; time series; Southeast U.S.A. DMSP/OLS; urban areas; vegetation adjusted nighttime light; time series; Southeast U.S.A.
►▼ Show Figures 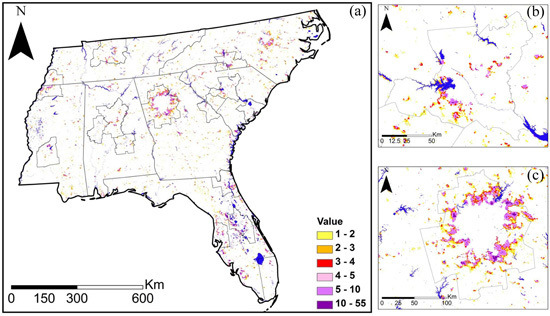