Deformation and Source Parameters of the 2015 Mw 6.5 Earthquake in Pishan, Western China, from Sentinel-1A and ALOS-2 Data
Next Article in Special Issue

Semi-natural grasslands with grazing management are characterized by high fine-scale species richness and have a high conservation value. The fact that fine-scale surveys of grassland plant communities are time-consuming may limit the spatial extent of ground-based diversity surveys. Remote sensing tools have the potential to support field-based sampling and, if remote sensing data are able to identify grassland sites that are likely to support relatively higher or lower levels of species diversity, then field sampling efforts could be directed towards sites that are of potential conservation interest. In the present study, we examined whether aerial hyperspectral (414–2501 nm) remote sensing can be used to predict fine-scale plant species diversity (characterized as species richness and Simpson’s diversity) in dry grazed grasslands. Vascular plant species were recorded within 104 (4 m × 4 m) plots on the island of Öland (Sweden) and each plot was characterized by a 245-waveband hyperspectral data set. We used two different modeling approaches to evaluate the ability of the airborne spectral measurements to predict within-plot species diversity: (1) a spectral response approach, based on reflectance information from (i) all wavebands, and (ii) a subset of wavebands, analyzed with a partial least squares regression model, and (2) a spectral heterogeneity approach, based on the mean distance to the spectral centroid in an ordinary least squares regression model. Species diversity was successfully predicted by the spectral response approach (with an error of ca. 20%) but not by the spectral heterogeneity approach. When using the spectral response approach, iterative selection of important wavebands for the prediction of the diversity measures simplified the model but did not improve its predictive quality (prediction error). Wavebands sensitive to plant pigment content (400–700 nm) and to vegetation structural properties, such as above-ground biomass (700–1300 nm), were identified as being the most important predictors of plant species diversity. We conclude that hyperspectral remote sensing technology is able to identify fine-scale variation in grassland diversity and has a potential use as a tool in surveys of grassland plant diversity. View Full-Text
Keywords: arable-to-grassland succession; northern Europe; species richness; inverse Simpson’s diversity index; HySpex spectrometer; partial least squares regression arable-to-grassland succession; northern Europe; species richness; inverse Simpson’s diversity index; HySpex spectrometer; partial least squares regression
►▼ Show Figures 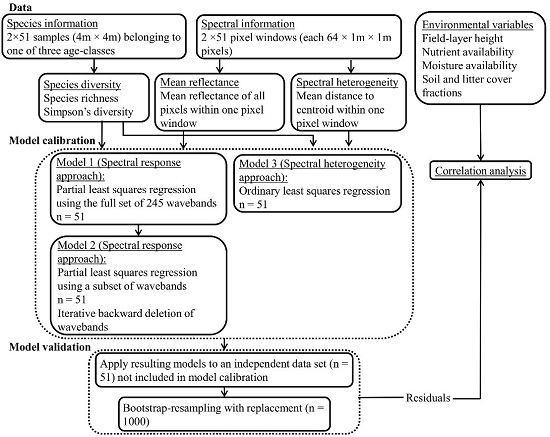