Local-scale environmental heterogeneity can provide microhabitats that influence the spatial distribution of competing species. Microhabitats may influence the distribution of seagrasses along elevation gradients, but difficulty measuring intertidal microtopography has hindered quantification. Using a terrestrial laser scanner (TLS), we mapped and monitored a 1.84 ha study site for three years to understand spatial and temporal patterns of sediment microtopography. We performed high-accuracy GPS surveys and vegetation surveys of a native and an invasive seagrass. TLS provided sub-decimeter scale precision in digital elevation models (DEMs) of the tideflat. The location and shape of microtopographic features were stable from year to year, but the magnitude of local relief varied. A simple index of topographic context predicted the shoot density of the native seagrass, Zostera marina and the invasive seagrass, Zostera japonica, but the shoot density of the invasive seagrass was better predicted by the shoot density of Z. marina than by topographic context. Microtopographic relief at this site appears to exert a strong influence on the meter-scale distribution of seagrass. We demonstrate the potential for TLS mapping of habitat-relevant microtopography in a soft sediment intertidal environment where TLS faces substantial challenges but promises unique insights. View Full-Text
Keywords: Terrestrial Laser Scanning; Lidar; seagrass; microhabitat; Zostera japonica; intertidal; topography Terrestrial Laser Scanning; Lidar; seagrass; microhabitat; Zostera japonica; intertidal; topography
►▼ Show Figures 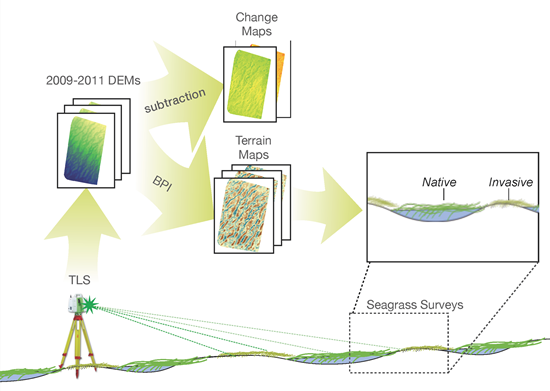