Blanding’s turtle (Emydoidea blandingii) is a threatened species under Canada’s Species at Risk Act. In southern Québec, field based inventories are ongoing to determine its abundance and potential habitat. The goal of this research was to develop means for mapping of potential habitat based on primary habitat attributes that can be detected with high-resolution remotely sensed imagery. Using existing spring leaf-off 20 cm resolution aerial orthophotos of a portion of Gatineau Park where some Blanding’s turtle observations had been made, habitat attributes were mapped at two scales: (1) whole wetlands; (2) within wetland habitat features of open water, vegetation (used for camouflage and thermoregulation), and logs (used for spring sun-basking). The processing steps involved initial pixel-based classification to eliminate most areas of non-wetland, followed by object-based segmentations and classifications using a customized rule sequence to refine the wetland map and to map the within wetland habitat features. Variables used as inputs to the classifications were derived from the orthophotos and included image brightness, texture, and segmented object shape and area. Independent validation using field data and visual interpretation showed classification accuracy for all habitat attributes to be generally over 90% with a minimum of 81.5% for the producer’s accuracy of logs. The maps for each attribute were combined to produce a habitat suitability map for Blanding’s turtle. Of the 115 existing turtle observations, 92.3% were closest to a wetland of the two highest suitability classes. High-resolution imagery combined with object-based classification and habitat suitability mapping methods such as those presented provide a much more spatially explicit representation of detailed habitat attributes than can be obtained through field work alone. They can complement field efforts to document and track turtle activities and can contribute to species inventory planning, conservation, and management. View Full-Text
Keywords: Blanding’s turtle; habitat; wetlands; remote sensing; orthophotos; object based classification Blanding’s turtle; habitat; wetlands; remote sensing; orthophotos; object based classification
►▼ Show Figures 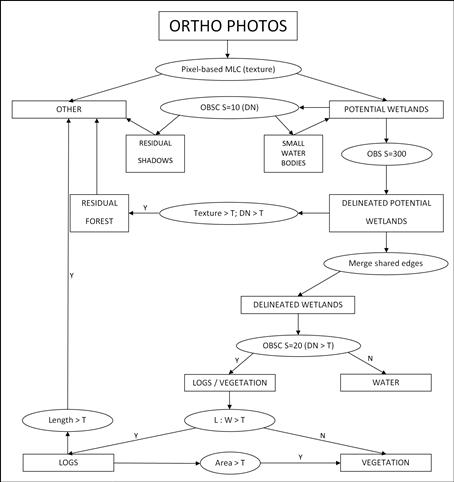