Water vapor radiative effects (WVRE) at surface in the long-wave (LW) and short-wave (SW) spectral ranges under cloud and aerosol free conditions are analyzed for seven stations in Spain over the 2007–2015 period. WVRE is calculated as the difference between the net flux obtained by two radiative transfer simulations; one with water vapor from Global Positioning System (GPS) measurements and the other one without any water vapor (dry atmosphere). The WVRE in the LW ranges from to , while in the SW it goes from to . The results show a clear seasonal cycle, which allows the classification of stations in three sub-regions. In general, for total (SW + LW) and LW WVRE, winter (DJF) and spring (MAM) values are lower than summer (JJA) and autumn (SON). However, in the case of SW WVRE, the weaker values are in winter and autumn, and the stronger ones in summer and spring. Positive trends for LW (and total) WVRE may partially explain the well-known increase of surface air temperatures in the study region. Additionally, negative trends for SW WVRE are especially remarkable, since they represent about a quarter of the contribution of aerosols to the strong brightening effect (increase of the SW radiation flux at surface associated with a reduction of the cloud cover and aerosol load) observed since the 2000s in the Iberian Peninsula, but with opposite sign, so it is suggested that water vapor could be partially masking the full magnitude of this brightening. View Full-Text
Keywords: water vapor; radiative effect; long-wave; Spain; Sourthwestern Europe; Europe; radiative transfer water vapor; radiative effect; long-wave; Spain; Sourthwestern Europe; Europe; radiative transfer
►▼ Show Figures 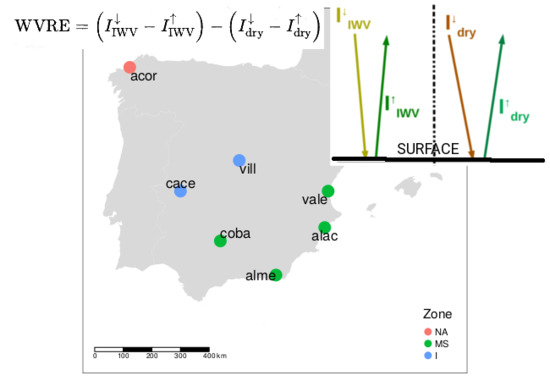