Bridge detection from Synthetic Aperture Radar (SAR) images has very important strategic significance and practical value, but there are still many challenges in end-to-end bridge detection. In this paper, a new deep learning-based network is proposed to identify bridges from SAR images, namely, multi-resolution attention and balance network (MABN). It mainly includes three parts, the attention and balanced feature pyramid (ABFP) network, the region proposal network (RPN), and the classification and regression. First, the ABFP network extracts various features from SAR images, which integrates the ResNeXt backbone network, balanced feature pyramid, and the attention mechanism. Second, extracted features are used by RPN to generate candidate boxes of different resolutions and fused. Furthermore, the candidate boxes are combined with the features extracted by the ABFP network through the region of interest (ROI) pooling strategy. Finally, the detection results of the bridges are produced by the classification and regression module. In addition, intersection over union (IOU) balanced sampling and balanced L1 loss functions are introduced for optimal training of the classification and regression network. In the experiment, TerraSAR data with 3-m resolution and Gaofen-3 data with 1-m resolution are used, and the results are compared with faster R-CNN and SSD. The proposed network has achieved the highest detection precision (P) and average precision (AP) among the three networks, as 0.877 and 0.896, respectively, with the recall rate (RR) as 0.917. Compared with the other two networks, the false alarm targets and missed targets of the proposed network in this paper are greatly reduced, so the precision is greatly improved. View Full-Text
Keywords: deep learning; bridge detection; attention mechanism; feature pyramid; SAR image; automatic detection deep learning; bridge detection; attention mechanism; feature pyramid; SAR image; automatic detection
►▼ Show Figures 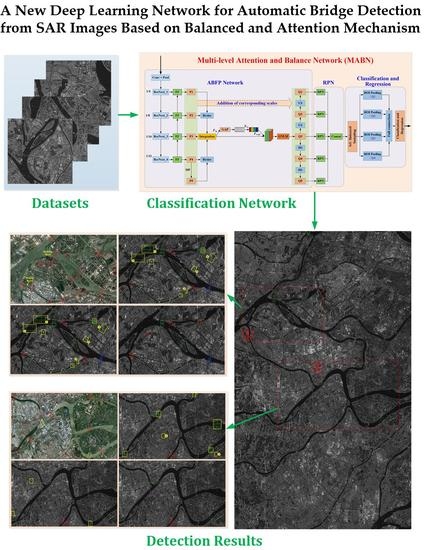