Rainfed agriculture occupies the majority of the world’s agricultural surface and is expected to increase in the near future causing serious effects on carbon cycle dynamics in the context of climate change. Carbon cycle across several temporal and spatial scales could be studied through spectral indices because they are related to vegetation structure and functioning and hence with carbon fluxes, among them soil respiration (Rs). The aim of this work was to assess Rs linked to crop phenology of a rainfed barley crop throughout two seasons based on spectral indices calculated from field spectroscopy data. The relationships between Rs, Leaf Area Index (LAI) and spectral indices were assessed by linear regression models with the adjusted coefficient of determination (Radj2). Results showed that most of the spectral indices provided better information than LAI throughout the studied period and that soil moisture and temperature were relevant variables in specific periods. During vegetative stages, indices based on the visible (VIS) region showed the best relationship with Rs. On the other hand, during reproductive stages indices containing the near infrared-shortwave infrared (NIR-SWIR) spectral region and those related to water content showed the highest relationship. The inter-annual variability found in Mediterranean regions was also observed in the estimated ratio of carbon emission to carbon fixation between years. Our results show the potential capability of spectral information to assess soil respiration linked to crop phenology across several temporal and spatial scales. These results can be used as a basis for the utilization of other remote information derived from satellites or airborne sensors to monitor crop carbon balances. View Full-Text
Keywords: phenology; leaf area index; carbon balance; field spectroscopy; Mediterranean climate phenology; leaf area index; carbon balance; field spectroscopy; Mediterranean climate
►▼ Show Figures 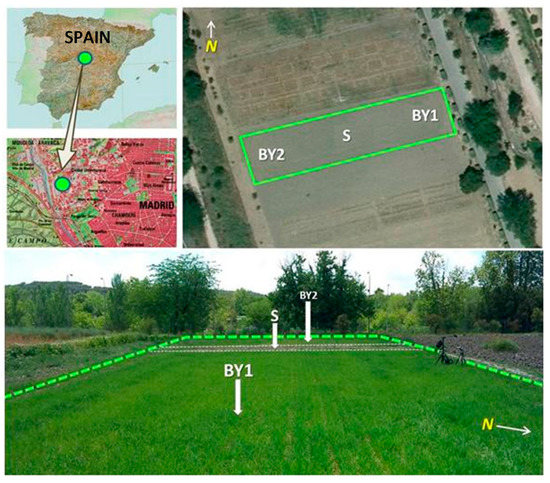