An operational split-window (SW) algorithm was developed to retrieve high-temporal-resolution land surface temperature (LST) from global geostationary (GEO) satellite data. First, the MODTRAN 5.2 and SeeBor V5.0 atmospheric profiles were used to establish a simulation database to derive the SW algorithm coefficients for GEO satellites. Then, the dynamic land surface emissivities (LSEs) in the two SW bands were estimated using the Advanced Spaceborne Thermal Emission and Reflection Radiometer (ASTER) Global Emissivity Dataset (GED), fractional vegetation cover (FVC), and snow cover products. Here, the proposed SW algorithm was applied to Himawari-8 Advanced Himawari Imager (AHI) observations. LST estimates were retrieved in January, April, July, and October 2016, and three validation methods were used to evaluate the LST retrievals, including the temperature-based (T-based) method, radiance-based (R-based) method, and intercomparison method. The in situ night-time observations from two Heihe Watershed Allied Telemetry Experimental Research (HiWATER) sites and four Terrestrial Ecosystem Research Network (TERN) OzFlux sites were used in the T-based validation, where a mean bias of −0.70 K and a mean root-mean-square error (RMSE) of 2.29 K were achieved. In the R-based validation, the biases were 0.14 and −0.13 K and RMSEs were 0.83 and 0.86 K for the daytime and nighttime, respectively, over four forest sites, four desert sites, and two inland water sites. Additionally, the AHI LST estimates were compared with the Collection 6 MYD11_L2 and MYD21_L2 LST products over southeastern China and the Australian continent, and the results indicated that the AHI LST was more consistent with the MYD21 LST and was generally higher than the MYD11 LST. The pronounced discrepancy between the AHI and MYD11 LST could be mainly caused by the differences in the emissivities used. We conclude that the developed SW algorithm is of high accuracy and shows promise in producing LST data with global coverage using observations from a constellation of GEO satellites. View Full-Text
Keywords: Himawari-8 AHI; operational split-window algorithm; land surface temperature; emissivity; validation Himawari-8 AHI; operational split-window algorithm; land surface temperature; emissivity; validation
►▼ Show Figures 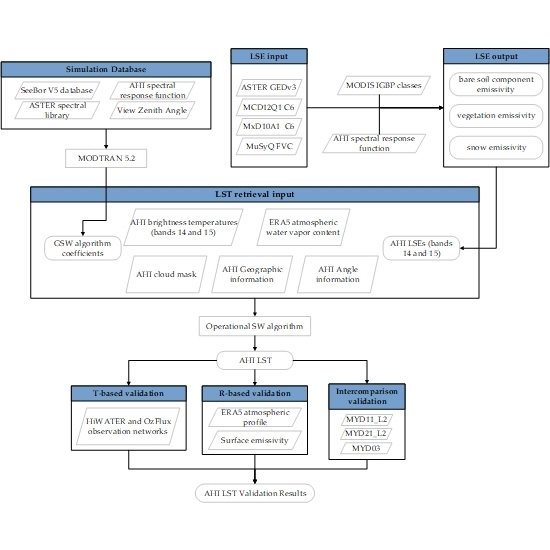