High-resolution gridded population data are important for understanding and responding to many socioeconomic and environmental problems. Local estimates of the population allow officials and researchers to make a better local planning (e.g., optimizing public services and facilities). This study used a random forest algorithm, on the basis of remote sensing (i.e., satellite imagery) and social sensing data (i.e., point-of-interest and building footprint), to disaggregate census population data for the five municipal districts of Zhengzhou city, China, onto 100 × 100 m grid cells. We used a statistical tool to detect areas with an abnormal population density; e.g., areas containing many empty houses or houses rented by more people than allowed, and conducted field work to validate our findings. Results showed that some categories of points-of-interest, such as residential communities, parking lots, banks, and government buildings were the most important contributing elements in modeling the spatial distribution of the residential population in Zhengzhou City. The exclusion of areas with an abnormal population density from model training and dasymetric mapping increased the accuracy of population estimates in other areas with a more common population density. We compared our product with three widely used gridded population products: Worldpop, the Gridded Population of the World, and the 1-km Grid Population Dataset of China. The relative accuracy of our modeling approach was higher than that of those three products in the five municipal districts of Zhengzhou. This study demonstrated potential for the combination of remote and social sensing data to more accurately estimate the population density in urban areas, with minimum disturbance from the abnormal population density. View Full-Text
Keywords: population distribution; random forest; remote sensing; social sensing; point-of-interest; building footprint population distribution; random forest; remote sensing; social sensing; point-of-interest; building footprint
►▼ Show Figures 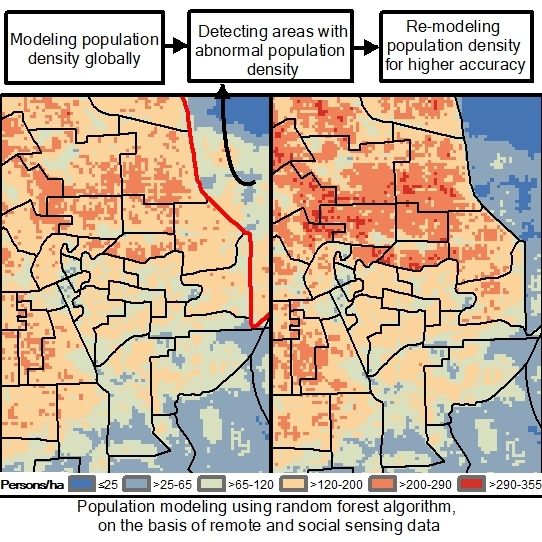