The disruption to natural light regimes caused by outdoor artificial nighttime lighting has significant impacts on human health and the natural world. Artificial light at night takes two forms, light emissions and skyglow (caused by the scattering of light by water, dust and gas molecules in the atmosphere). Key to determining where the biological impacts from each form are likely to be experienced is understanding their spatial occurrence, and how this varies with other landscape factors. To examine this, we used data from the Visible Infrared Imaging Radiometer Suite (VIIRS) day/night band and the World Atlas of Artificial Night Sky Brightness, to determine covariation in (a) light emissions, and (b) skyglow, with human population density, landcover, protected areas and roads in Britain. We demonstrate that, although artificial light at night increases with human density, the amount of light per person decreases with increasing urbanization (with per capita median direct emissions three times greater in rural than urban populations, and per capita median skyglow eleven times greater). There was significant variation in artificial light at night within different landcover types, emphasizing that light pollution is not a solely urban issue. Further, half of English National Parks have higher levels of skyglow than light emissions, indicating their failure to buffer biodiversity from pressures that artificial lighting poses. The higher per capita emissions in rural than urban areas provide different challenges and opportunities for mitigating the negative human health and environmental impacts of light pollution. View Full-Text
Keywords: albedo; landcover; light emissions; light pollution; protected areas; skyglow; sky brightness; urbanization albedo; landcover; light emissions; light pollution; protected areas; skyglow; sky brightness; urbanization
►▼ Show Figures 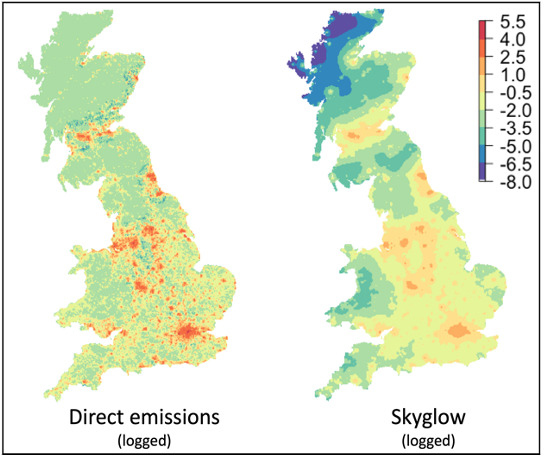