Digital Drill Core Models: Structure-from-Motion as a Tool for the Characterisation, Orientation, and Digital Archiving of Drill Core Samples
Previous Article in Journal

Repeat photogrammetry is increasingly the go-too tool for long-term geomorphic monitoring, but quantifying the differences between structure-from-motion (SfM) models is a developing field. Volumetric differencing software (such as the open-source package CloudCompare) provides an efficient mechanism for quantifying change in landscapes. In this case study, we apply this methodology to coastal boulder deposits on Inishmore, Ireland. Storm waves are known to move these rocks, but boulder transportation and evolution of the deposits are not well documented. We used two disparate SfM data sets for this analysis. The first model was built from imagery captured in 2015 using a GoPro Hero 3+ camera (fisheye lens) and the second used 2017 imagery from a DJI FC300X camera (standard digital single-lens reflex (DSLR) camera); and we used CloudCompare to measure the differences between them. This study produced two noteworthy findings: First, volumetric differencing reveals that short-term changes in boulder deposits can be larger than expected, and that frequent monitoring can reveal not only the scale but the complexities of boulder transport in this setting. This is a valuable addition to our growing understanding of coastal boulder deposits. Second, SfM models generated by different imaging hardware can be successfully compared at sub-decimeter resolution, even when one of the camera systems has substantial lens distortion. This means that older image sets, which might not otherwise be considered of appropriate quality for co-analysis with more recent data, should not be ignored as data sources in long-term monitoring studies. View Full-Text
Keywords: structure-from-motion; UAVs; coastal boulder deposits; time series; storm waves; distortion structure-from-motion; UAVs; coastal boulder deposits; time series; storm waves; distortion
►▼ Show Figures 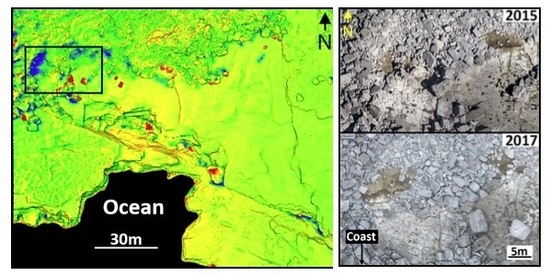