Radar altimetry in the context of sea ice has mostly been exploited to retrieve basin-scale information about sea ice thickness. In this paper, we investigate the sensitivity of altimetric waveforms to small-scale changes (a few hundred meters to about 10 km) of the sea ice surface. Near-coincidental synthetic aperture radar (SAR) imagery and CryoSat-2 altimetric data in the Beaufort Sea are used to identify and study the spatial evolution of altimeter waveforms over these features. Open water and thin ice features are easily identified because of their high peak power waveforms. Thicker ice features such as ridges and multiyear ice floes of a few hundred meters cause a response in the waveform. However, these changes are not reflected in freeboard estimates. Retrieval of robust freeboard estimates requires homogeneous floes in the order of 10 km along-track and a few kilometers to both sides across-track. We conclude that the combination of SAR imagery and altimeter data could improve the local sea ice picture by extending spatially scarce freeboard estimates to regions of similar SAR signature. View Full-Text
Keywords: sea ice; SAR; altimetry sea ice; SAR; altimetry
►▼ Show Figures 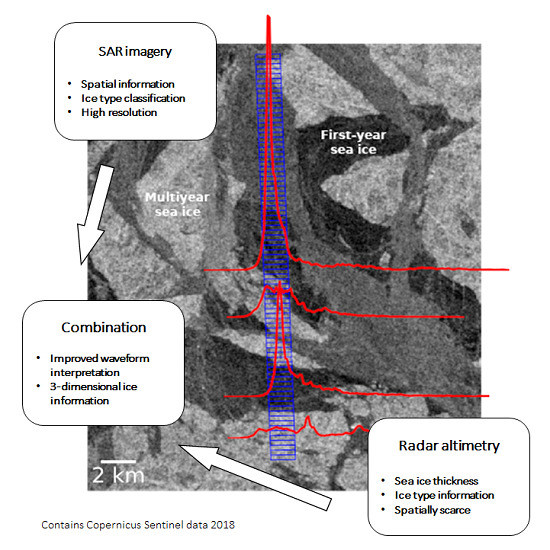