Over the past decade, high-resolution noninvasive sensors have been widely used in explorations of the first few meters underground at archaeological sites. However, remote sensing actions aimed at the study of structural elements that require a very high resolution are rare. In this study, layer characterization of the floor mosaic substrate of the Pisões Roman archaeological site was carried out. This work was performed with two noninvasive techniques: 3D ground penetrating radar (3D GPR) operating with a 1.6 GHz central frequency antenna, which is a very high-resolution geophysical method, and photogrammetry with imagery obtained by an unmanned aerial vehicle (UAV), which is a very high-resolution optical method. The first method allows penetration up to 30–40 cm depth and 3D models can be obtained, and with the second method, very high detail surface images and digital surface models can be obtained. In this study, we analyze a combination of data from both sensors to study a portion of the floor mosaic of the Pisões Roman Villa (Beja, Portugal) to obtain evidence of the inner structure. In this context, we have detected the main structural levels of the Roman mosaic and some internal characteristics, such as etched guides, internal cracking, and detection of higher humidity areas. The methodology that we introduce in this work can be referenced for the documentation of ancient pavements and may be used prior to carrying out preservation activities. Additionally, we intend to show that a Roman mosaic, understood as an archaeological structure, does not consist of only beautiful superficial drawings defined by the tesserae, but these mosaics are much more complex elements that must be considered in their entirety for preservation. View Full-Text
Keywords: subsurface detection; GPR and photogrammetry UAV; Roman mosaic structure; noninvasive archaeological inspection subsurface detection; GPR and photogrammetry UAV; Roman mosaic structure; noninvasive archaeological inspection
►▼ Show Figures 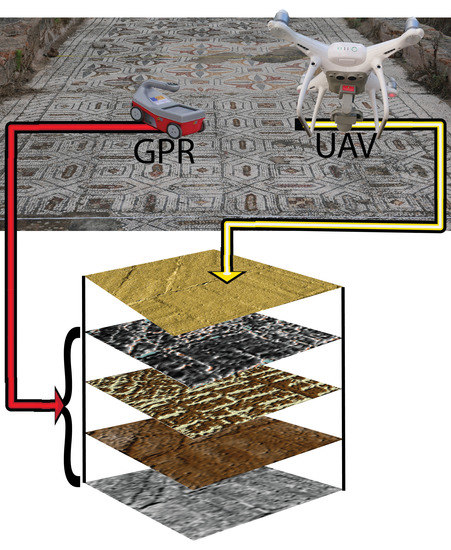