Towards a Data-Derived Observation Error Covariance Matrix for Satellite Measurements

Hyperspectral remote sensing is considered to be an effective tool in crop monitoring and estimation of biomass. Many of the previous approaches are from single year or single date measurements, even though the complete crop growth with multiple years would be required for an appropriate estimation of biomass. The aim of this study was to estimate the fresh matter biomass (FMB) by terrestrial hyperspectral imaging of the three crops (lablab, maize and finger millet) under different levels of nitrogen fertiliser and water supply. Further, the importance of the different spectral regions for the estimation of FMB was assessed. The study was conducted in two experimental layouts (rainfed (R) and irrigated (I)) at the University of Agricultural Sciences, Bengaluru, India. Spectral images and the FMB were collected over three years (2016–2018) during the growing season of the crops. Random forest regression method was applied to build FMB models. R² validation (R²val) and relative root mean square error prediction (rRMSEP) was used to evaluate the FMB models. The Generalised model (combination of R and I data) performed better for lablab (R²val = 0.53, rRMSEP = 13.9%), maize (R²val = 0.53, rRMSEP = 18.7%) and finger millet (R²val = 0.46, rRMSEP = 18%) than the separate FMB models for R and I. In the best derived model, the most important variables contributing to the estimation of biomass were in the wavelength ranges of 546–910 nm (lablab), 750–794 nm (maize) and 686–814 nm (finger millet). The deviation of predicted and measured FMB did not differ much among the different levels of N and water supply. However, there was a trend of overestimation at the initial stage and underestimation at the later stages of crop growth. View Full-Text
Keywords: Cash crops; Hyperspectral imaging; Biomass prediction; Machine learning Cash crops; Hyperspectral imaging; Biomass prediction; Machine learning
►▼ Show Figures 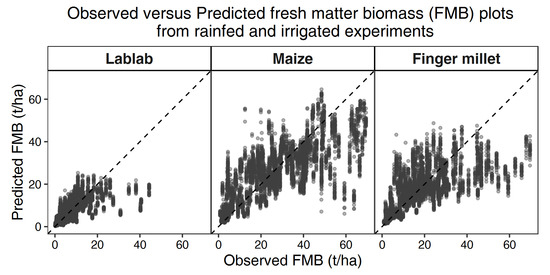