Crop NDVI Monitoring Based on Sentinel 1

Over the last few decades, small-scale irrigation has been implemented in Burkina Faso as a strategy to mitigate the impacts of adverse climate conditions. However, the development of irrigated perimeters around small and medium water reservoirs has put the water resources under significant pressure, given the uncontrolled exploitation and lack of efficacious management plan. Insights into changes in irrigated areas around these reservoirs are therefore crucial for their sustainable management while meeting the different agricultural water needs. They will help to center policy priorities in terms of major impacts on the reservoirs; and thereby elaborate relevant mitigation and/or adaptation strategies. The main objectives of this study were to (1) quantify the changes in irrigated land areas surrounding the Mogtedo water reservoir between 1987 and 2015; and (2) determine whether the irrigable potential of this reservoir could sustainably meet the agricultural water needs under a more variable and changing climate. A low-cost remote sensing method based on Landsat imagery (Thematic Mapper, Enhanced Thematic Mapper Plus, and Operational Land Imager) and using Support Vector Machine (SVM) classification was developed to detect the changes in proportion of land use/land cover (LULC) in the Mogtedo region. A forward and backward change detection analysis requiring agronomic expertise was also applied to correct the pixels temporal trajectories. In addition, an intensity analysis was performed to assess land changes at time intervals, category, and transition levels. Five main LULC classes were identified: bare and hydromorphic soils, irrigated and rainfed agricultural areas, and water bodies. Overall, the classification of LULC was satisfactory with the overall accuracy and kappa coefficients ranging from 94.22 to 95.60% and 0.92 to 0.94, respectively. Results showed that LULC transformations were faster between 2000 and 2015, compared to the 1987–2000 period. The majority of categories (LULC classes) were active in terms of intensity of change (gain or loss) during the 1987–2000 and 2000–2015 periods, except hydromorphic soils. During these periods, the transition from rainfed agricultural areas to irrigated agricultural areas were targeted and stationary. Our findings revealed a 54% increase in irrigated areas between 1987 and 2015. The reservoir water volume decreased markedly from 9,077,000 m3 to 7,100,000 m3 during the same period. Such a decrease threatens the satisfaction of agricultural water requirements, since the reservoir is the unique source of irrigation water in the region. It could potentially lead to conflicts between users if adequate strategies for the sustainable management of the Mogtedo reservoir are not implemented. The methodology used in this study also addressed the challenge of building up historical spatial information database in data-scarce environments, and could be replicated readily in regions or countries like Burkina Faso. View Full-Text
Keywords: irrigation; land use and land cover; change detection analysis; intensity analysis; Landsat; Sub-Saharan Africa irrigation; land use and land cover; change detection analysis; intensity analysis; Landsat; Sub-Saharan Africa
►▼ Show Figures 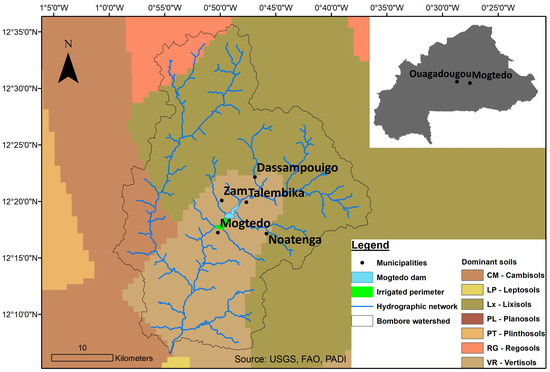