This paper presents a novel framework to achieve 3D semantic labeling of objects (e.g., trees, buildings, and vehicles) from airborne laser-scanning point clouds. To this end, we propose a framework which consists of hierarchical clustering and higher-order conditional random fields (CRF) labeling. In the hierarchical clustering, the raw point clouds are over-segmented into a set of fine-grained clusters by integrating the point density clustering and the classic K-means clustering algorithm, followed by the proposed probability density clustering algorithm. Through this process, we not only obtain a more uniform size and more homogeneous clusters with semantic consistency, but the topological relationships of the cluster’s neighborhood are implicitly maintained by turning the problem of topology maintenance into a clustering problem based on the proposed probability density clustering algorithm. Subsequently, the fine-grained clusters and their topological context are fed into the CRF labeling step, from which the fine-grained cluster’s semantic labels are learned and determined by solving a multi-label energy minimization formulation, which simultaneously considers the unary, pairwise, and higher-order potentials. Our experiments of classifying urban and residential scenes demonstrate that the proposed approach reaches 88.5% and 86.1% of “m” estimated by averaging all classes of the -scores. We prove that the proposed method outperforms five other state-of-the-art methods. In addition, we demonstrate the effectiveness of the proposed energy terms by using an “ablation study” strategy. View Full-Text
Keywords: airborne laser-scanning; segmentation; cluster classification; neighborhood topology; higher-order potential; CRF optimization airborne laser-scanning; segmentation; cluster classification; neighborhood topology; higher-order potential; CRF optimization
►▼ Show Figures 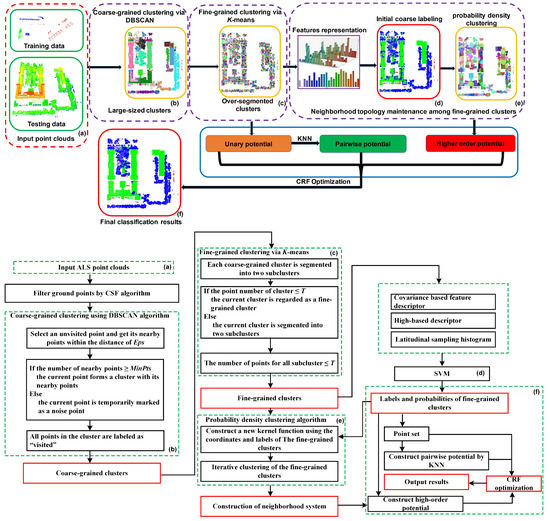