As the basic feature of building, building edges play an important role in many fields such as urbanization monitoring, city planning, surveying and mapping. Building edges detection from high spatial resolution remote sensing (HSRRS) imagery has always been a long-standing problem. Inspired by the recent success of deep-learning-based edge detection, a building edge detection model using a richer convolutional features (RCF) network is employed in this paper to detect building edges. Firstly, a dataset for building edges detection is constructed by the proposed most peripheral constraint conversion algorithm. Then, based on this dataset the RCF network is retrained. Finally, the edge probability map is obtained by RCF-building model, and this paper involves a geomorphological concept to refine edge probability map according to geometric morphological analysis of topographic surface. The experimental results suggest that RCF-building model can detect building edges accurately and completely, and that this model has an edge detection F-measure that is at least 5% higher than that of other three typical building extraction methods. In addition, the ablation experiment result proves that using the most peripheral constraint conversion algorithm can generate more superior dataset, and the involved refinement algorithm shows a higher F-measure and better visual effect contrasted with the non-maximal suppression algorithm. View Full-Text
Keywords: richer convolution features; building edges detection; high spatial resolution remote sensing imagery richer convolution features; building edges detection; high spatial resolution remote sensing imagery
►▼ Show Figures 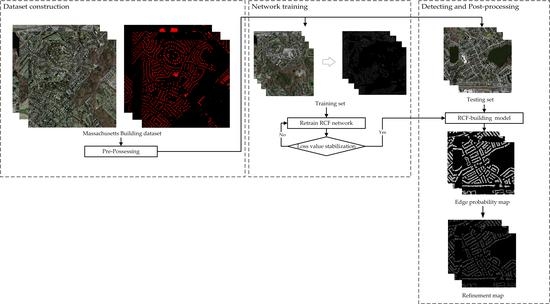