Monitoring of aboveground net primary production (ANPP) is critical for effective management of rangeland ecosystems but is problematic due to the vast extent of rangelands globally, and the high costs of ground-based measurements. Remote sensing of absorbed photosynthetically active radiation (APAR) can be used to predict ANPP, potentially offering an alternative means of quantifying ANPP at both high temporal and spatial resolution across broad spatial extents. The relationship between ANPP and APAR has often been quantified based on either spatial variation across a broad region or temporal variation at a location over time, but rarely both. Here we assess: (i) if the relationship between ANPP and APAR is consistent when evaluated across time and space; (ii) potential factors driving differences between temporal versus spatial models, and (iii) the magnitude of potential errors relating to space for time transformations in quantifying productivity. Using two complimentary ANPP datasets and remotely sensed data derived from MODIS and a Landsat/MODIS fusion data product, we find that slopes of spatial models are generally greater than slopes of temporal models. The abundance of plant species with different structural attributes, specifically the abundance of C4 shortgrasses with prostrate canopies versus taller, more productive C3 species with more vertically complex canopies, tended to vary more dramatically in space than over time. This difference in spatial versus temporal variation in these key plant functional groups appears to be the primary driver of differences in slopes among regression models. While the individual models revealed strong relationships between ANPP to APAR, the use of temporal models to predict variation in space (or vice versa) can increase error in remotely sensed predictions of ANPP. View Full-Text
Keywords: NDVI; temporal; spatial; plant composition; radiation use efficiency; MODIS; LANDSAT; biomass; ANPP NDVI; temporal; spatial; plant composition; radiation use efficiency; MODIS; LANDSAT; biomass; ANPP
►▼ Show Figures 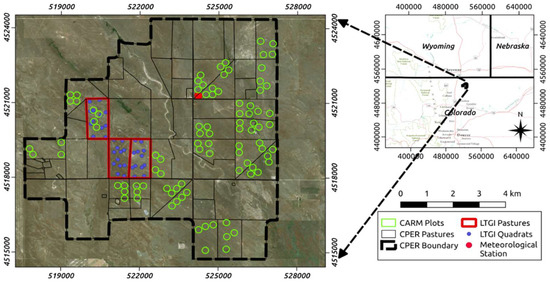