:
Analysis of Global Positioning System (GPS) position time series and its common mode components (CMC) is very important for the investigation of GPS technique error, the evaluation of environmental loading effects, and the estimation of a realistic and unbiased GPS velocity field for geodynamic applications. In this paper, we homogeneously processed the daily observations of 231 Crustal Movement Observation Network of China (CMONOC) Continuous GPS stations to obtain their position time series. Then, we filtered out the CMC and evaluated its effects on the periodic signals and noise for the CMONOC time series. Results show that, with CMC filtering, peaks in the stacked power spectra can be reduced at draconitic harmonics up to the 14th, supporting the point that the draconitic signal is spatially correlated. With the colored noise suppressed by CMC filtering, the velocity uncertainty estimates for both of the two subnetworks, CMONOC-I (≈16.5 years) and CMONOC-II (≈4.6 years), are reduced significantly. However, the CMONOC-II stations obtain greater reduction ratios in velocity uncertainty estimates with average values of 33%, 38%, and 54% for the north, east, and up components. These results indicate that CMC filtering can suppress the colored noise amplitudes and improve the precision of velocity estimates. Therefore, a unified, realistic, and three-dimensional CMONOC GPS velocity field estimated with the consideration of colored noise is given. Furthermore, contributions of environmental loading to the vertical CMC are also investigated and discussed. We find that the vertical CMC are reduced at 224 of the 231 CMONOC stations and 170 of them are with a root mean square (RMS) reduction ratio of CMC larger than 10%, confirming that environmental loading is one of the sources of CMC for the CMONOC height time series.
Keywords:
Global Positioning System (GPS); Crustal Movement Observation Network of China (CMONOC); time series; periodic signals; noise; Common Mode Components (CMC); Principal Component Analysis (PCA); velocity field; environmental loading 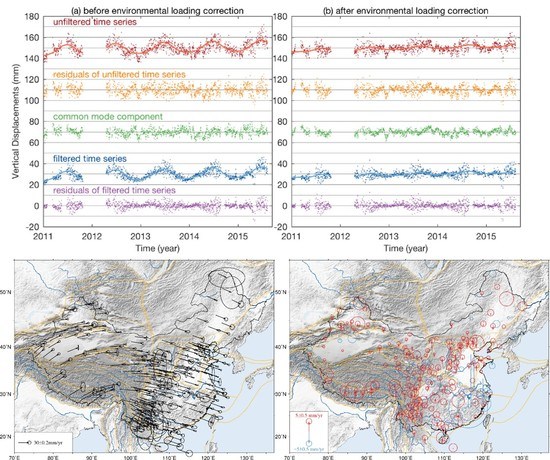 We collected the daily GPS observations of 260 CMONOC stations from February 1999 to August 2015. The observations were then processed with GAMIT/GLOBK software (Ver. 10.5, http://geoweb.mit.edu/gg/) developed by Massachusetts Institute of Technology, Scripps Institution of Oceanography and Harvard University, the United States [44]. Station coordinates, orbital parameters, tropospheric delay parameters, and Earth orientation parameters were estimated. Vienna Mapping Function 1 (VMF1) [45] and a priori zenith hydrostatic delay from the European Centre for Medium-Range Weather Forecasts (ECMWF) [46] were adopted for the correction of tropospheric delay. International Geomagnetic Reference Field 11 (IGRF11) [47] and ionospheric data from the Centre for Orbit Determination in Europe (CODE) [48] were used for the correction of high order ionospheric delay. The Finite Element Solutions 2004 (FES2004) model [49] was adopted for modeling the Ocean tide loading. The observations were weighted according to their elevation angles and post-fit phase residuals. The cutoff elevation angle was set as 10°. Meanwhile, we also processed 73 globally evenly-distributed IGS stations as shown in Figure A1 with the same strategy. To speed up the calculation, the 260 CMONOC stations and 73 global IGS stations were divided into eight and two interwoven subnetworks, respectively. Afterwards, all of the daily loosely constrained solutions produced by GAMIT were combined and aligned to the IGb08 reference frame [50] by GLOBK with a six parameter (three translation and three rotation parameters) transformation which minimizes the coordinate differences of the globally distributed IGS stations.
We excluded 29 stations with observation time spans less than two years or with poor quality. Thus, only 231 CMONOC stations were analyzed. Their locations and time spans are shown in Figure 1. Among the 231 CMONOC stations, 27 of them were generally observed for ≈16.5 years and termed as CMONOC-I, and the other 204 stations were observed since 2011.0 and termed as CMONOC-II in this paper.
The resulting position time series for the north, east and up (NEU) components were then handled separately and modeled with the following function [53]: in which and are the reference coordinate and epoch, respectively; is the velocity; is the epoch of GPS observations; is the number of offset events; is the ordinal number of the offset events, , …, ; is the time difference between the epoch of GPS observations and the epoch of the th offset event as defined in Equation (2); H() is the Heaviside step function used to model the offsets as defined in Equation (3); is the th offset; and are the coefficients of seasonal signals; ; year and year; is the number of logarithmic transients caused by earthquakes; is the ordinal number of the post-seismic deformation events, , …, ; is the epoch of the earthquake event; is the time since the earthquake occurred as defined in Equation (4); and is the transient timescale parameter set as year as suggested [53].
The offsets due to earthquakes or device changes were identified by checking the earthquake catalogues and station log files and then inspecting the time series. The earthquakes which lead to the offsets and/or post-seismic deformation of these CMONOC position time series are listed in Table A1. Some other offsets caused by unknown reasons were also identified by visual inspection. All identified offsets were then estimated with Equation (1). Moreover, time series of three north and nine east components show obvious post-seismic deformation caused by the 2011 Mw 9.0 Tohoku-Oki earthquake [54] and the 2001 Mw 7.8 Kokoxili earthquake [55]. An example of stations affected by co- and post-seismic deformation is shown in Figure A2. Outliers in the residual time series were identified and cleaned according to the three interquartile range (IQR) thresholds [56].

4.1. Characteristics of the Draconitic Harmonics

Figure 7, Figure 8, Figure 9 and Figure 10 have demonstrated that CMC filtering with PCA is capable to decrease the draconitic harmonics for both CMONOC-I and CMONOC-II. Compared with CMONOC-I, CMONOC-II shows a more significant reduction. We attribute this difference to the fact that the spatial correlations between the CMONOC-II stations are more significant as their interstation distances are much smaller and, thus, more CMC components are reduced by the filtering. In addition, a considerable part of the CMONOC-I stations are not included in the calculation of CMC and just corrected with the average responses. In general, these results indicate that the CMC in the CMONOC time series contains the draconitic harmonic and some other periodic signals, thus supporting the conclusion drawn by Amiri-Simkooei [63] and Amiri-Simkooei et al. [12] that the draconitic signal is correlated in space. However, these results cannot exclude the possibility that the draconitic signal is partly due to site-specific effects as suggested by King and Watson [16] because there are still several peaks visible at the frequencies of the draconitic harmonics and the estimation of the power spectrum has uncertainty. Moreover, these results are consistent to the conclusions of Abraha et al. [17].

4.2. Changes of the Noise Characteristics Due to CMC Filtering

Daily position residual time series of 231 CMONOC GPS stations have been analyzed to investigate the effects of CMC filtering with PCA on the periodic signals and noise characteristics. The source of the draconitic signal in the CMONOC GPS position time series was discussed. The noise characteristics of the CMONOC-I (27 stations, ≈16.5 years) and CMONOC-II (204 stations, ≈4.6 years) stations before and after CMC filtering have been compared, and possible reasons for their differences have been discussed, such as the differences in time span of observations, number of stations, and interstation distances. Therefore, a unified, realistic, and three-dimensional CMONOC GPS velocity field estimated with the consideration of colored noise is given. Furthermore, contributions of environmental loading to the CMC of CMONOC were quantified as well. The following are the main findings:

This research was funded by the National Science Fund for Distinguished Young Scholars of China (grant no. 41525014), the Science Fund for Creative Research Groups of the National Natural Science Foundation of China (grant no. 41721003), the Program for Changjiang Scholars of the Ministry of Education of China and the Major Project of Beijing Future Urban Design Innovation Center, Beijing University of Civil Engineering and Architecture (UDC 2018031321). German Academic Exchange Service (DAAD) Thematic Network Program “Modern Geodetic Space Techniques for Global Change Monitoring” (Project ID. 57173947). 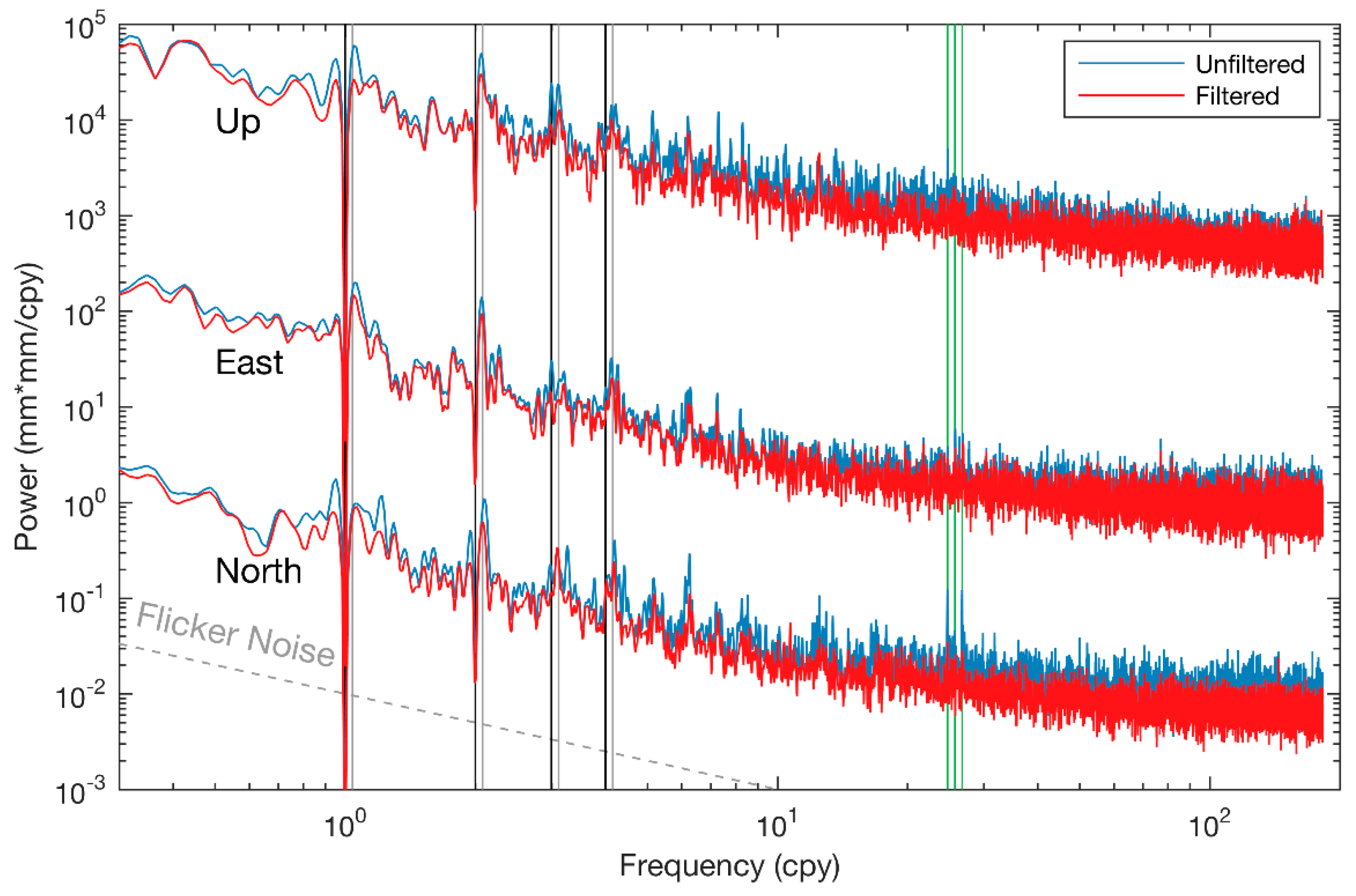