Is Ocean Reflectance Acquired by Citizen Scientists Robust for Science Applications?
Next Article in Special Issue

Understanding the influence of mesoscale and submesoscale features on the structure of phytoplankton is a key aspect in the assessment of their influence on marine biogeochemical cycling and cross-shore exchanges of plankton in Eastern Boundary Current Systems (EBCS). In this study, the spatio-temporal evolution of phytoplankton size classes (PSC) in surface waters associated with mesoscale eddies in the EBCS off central-southern Chile was analyzed. Chlorophyll-a (Chl-a) size-fractionated filtration (SFF) data from in situ samplings in coastal and coastal transition waters were used to tune a three-component (micro-, nano-, and pico-phytoplankton) model, which was then applied to total Chl-a satellite data (ESA OC-CCI product) in order to retrieve the Chl-a concentration of each PSC. A sea surface, height-based eddy-tracking algorithm was used to identify and track one cyclonic (sC) and three anticyclonic (ssAC1, ssAC2, sAC) mesoscale eddies between January 2014 and October 2015. Satellite estimates of PSC and in situ SFF Chl-a data were highly correlated (0.64 < r < 0.87), although uncertainty values for the microplankton fraction were moderate to high (50 to 100% depending on the metric used). The largest changes in size structure took place during the early life of eddies (~2 months), and no major differences in PSC between eddy center and periphery were found. The contribution of the microplankton fraction was ~50% (~30%) in sC and ssAC1 (ssAC2 and sAC) eddies when they were located close to the coast, while nanoplankton was dominant (~60–70%) and picoplankton almost constant (<20%) throughout the lifetime of eddies. These results suggest that the three-component model, which has been mostly applied in oceanic waters, is also applicable to highly productive coastal upwelling systems. Additionally, the PSC changes within mesoscale eddies obtained by this satellite approach are in agreement with results on phytoplankton size distribution in mesoscale and submesoscale features in this region, and are most likely triggered by variations in nutrient concentrations and/or ratios during the eddies’ lifetimes. View Full-Text
Keywords: phytoplankton size classes; remote sensing; mesoscale eddies; coastal upwelling system; size-fractionated filtration data; Eastern Boundary Current Systems phytoplankton size classes; remote sensing; mesoscale eddies; coastal upwelling system; size-fractionated filtration data; Eastern Boundary Current Systems
►▼ Show Figures 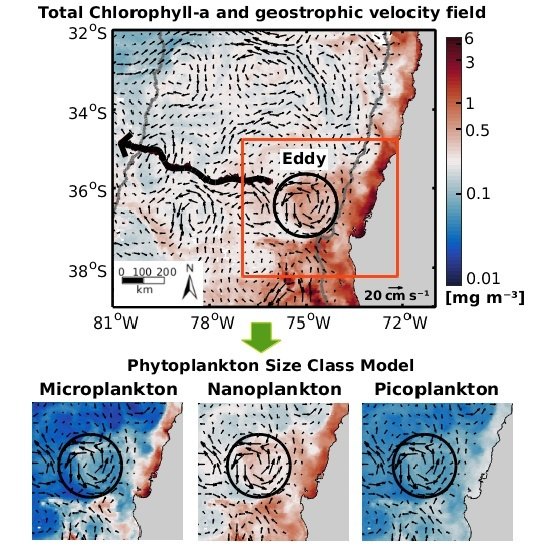