Monitoring Water Levels and Discharges Using Radar Altimetry in an Ungauged River Basin: The Case of the Ogooué

Launched on 16 February 2016, Sentinel-3A (S3A) carries a two-band microwave radiometer (MWR) similar to that of Envisat, and is aimed at the precise retrieval of the wet tropospheric correction (WTC) through collocated measurements using the Synthetic Aperture Radar Altimeter (SRAL) instrument. This study aims at presenting an independent assessment of the WTC derived from the S3A MWR over the open and coastal ocean. Comparisons with other four MWRs show Root Mean Square (RMS) differences (cm) of S3A with respect to these sensors of 1.0 (Global Precipitation Measurement (GPM) Microwave Imager, GMI), 1.2 (Jason-2), 1.3 (Jason-3), and 1.5 (Satellite with ARgos and ALtika (SARAL)). The linear fit with respect to these MWR shows scale factors close to 1 and small offsets, indicating a good agreement between all these sensors. In spite of the short analysis period of 10 months, a stable temporal evolution of the S3A WTC has been observed. In line with the similar two-band instruments aboard previous European Space Agency (ESA) altimetric missions, strong ice and land contamination can be observed, the latter mainly found up to 20–25 km from the coast. Comparisons with the European Centre for Medium-Range Weather Forecasts (ECMWF) and an independent WTC derived only from third party data are also shown, indicating good overall performance. However, improvements in both the retrieval algorithm and screening of invalid MWR observations are desirable to achieve the quality of the equivalent WTC from Jason-3. The outcome of this study is a deeper knowledge of the measurement capabilities and limitations of the type of MWR aboard S3A and of the present WTC retrieval algorithms. View Full-Text
Keywords: Sentinel-3; satellite altimetry; microwave radiometer; wet tropospheric correction; wet path delay; sensor calibration Sentinel-3; satellite altimetry; microwave radiometer; wet tropospheric correction; wet path delay; sensor calibration
►▼ Show Figures 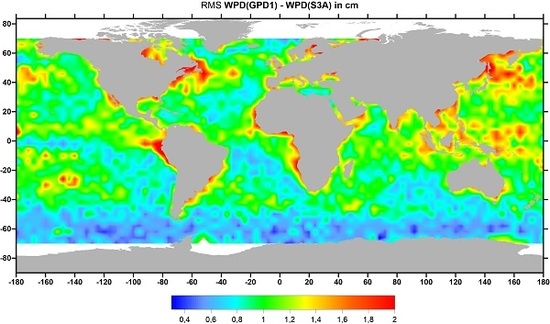