Arctic sea ice extent has continued to decline in recent years, and the fractional coverage of multi-year sea ice has decreased significantly during this period. The Beaufort Sea region has been the site of much of the loss of multi-year sea ice, and it continues to play a large role in the extinction of ice during the melt season. We present an analysis of the influence of satellite-derived ice surface temperature, ice thickness, albedo, and downwelling longwave/shortwave radiation as well as latitude and airborne snow depth estimates on the change in sea ice concentration in the Beaufort Sea from 2009 to 2016 using a Lagrangian tracking database. Results from this analysis indicate that parcels that melt during summer in the Beaufort Sea reside at lower latitudes and have lower ice thickness at the beginning of the melt season in most cases. The influence of sea ice thickness and snow depth observed by IceBridge offers less conclusive results, with some years exhibiting higher thicknesses/depths for melted parcels. Parcels that melted along IceBridge tracks do exhibit lower latitudes and ice thicknesses, however, which indicates that earlier melt and breakup of ice may contribute to a greater likelihood of extinction of parcels in the summer. View Full-Text
Keywords: sea ice; cryosphere; IceBridge; satellite; airborne; Beaufort Sea; Lagrangian tracking sea ice; cryosphere; IceBridge; satellite; airborne; Beaufort Sea; Lagrangian tracking
►▼ Show Figures 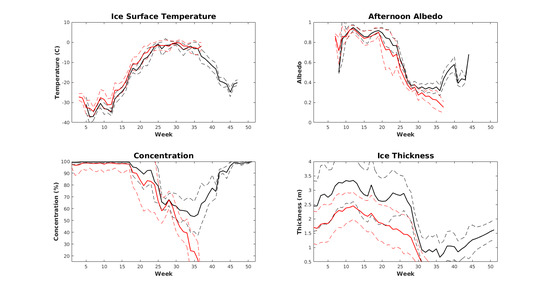