The Effects of a University’s Self-Presentation and Applicants’ Regulatory Focus on Emotional, Behavioral, and Cognitive Student Engagement

The acceleration of average temperature of lands and oceans, rising sea level, frequent extreme weather events and ocean acidification denote that climate change is a contemporary pressing dilemma facing the world. Everyday human activities such as open burning, deforestation, burning of fossil fuels and agricultural activities significantly contribute to Earth warming. Preventing the aforementioned activities reduce the greenhouse gas emission to the atmosphere and subsequently slows the changes in climate. Thus, climate change education is integral to educate people on the destructive consequences of their actions to the climate. Past studies revealed that well-established theories and models guided the designing of education to deliver behavioral change in many countries and reportedly improved participants’ knowledge, attitude and motivation. However, these theories and models exist as an after effect of the education and the long-term impact of the initiative frequently not found and less information available on the sustainability of such education. Additionally, effective climate change education is typically context-based and designed based on factors related to local students’ behavior. Hence, this study examined how knowledge and psychological factors such as belief and motivation explain the formation of climate conserving behavior among secondary school students. A total of 221 questionnaires was distributed to 14 years old Malaysian secondary school students to measure knowledge, motivation and belief. The data obtained were later analyzed using the partial least squares structural equation modelling (PLS-SEM) approach. The findings revealed that knowledge (β = 0.259, p < 0.05), belief (β = 0.295, p < 0.05) and motivation (β = 0.546, p < 0.05) positively affects the behavior. These findings reflected that knowledge, belief and motivation collectively explain a total of 65.5% of variances in the formation of climate conserving behavior among Malaysian secondary school students. View Full-Text
Keywords: belief; climate conserving behaviors; climate change knowledge; secondary school students; self-determined motivation belief; climate conserving behaviors; climate change knowledge; secondary school students; self-determined motivation
►▼ Show Figures 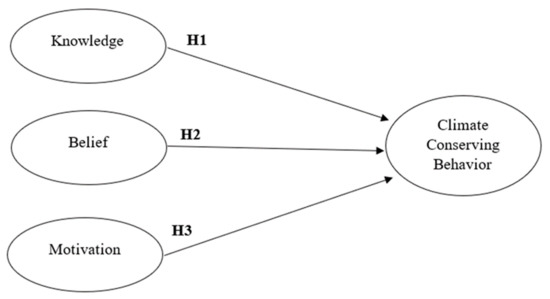