What Are the Implications of Globalization on Sustainability?—A Comprehensive Study

As an important form of clean energy, photovoltaic (PV) power generation is entering a rapid development phase. Qinghai, China is located on the Qinghai-Tibet Plateau. It has sufficient sunlight and rich heat and light resources, includes a large area of the Gobi Desert, and has become China’s largest base for PV power generation. However, large-scale PV development in deserts changes the local surface energy distribution and impacts local microclimates. This study considered the Gonghe PV Power Plant in Qinghai as an example. Three monitoring stations were set up in the PV power plant, transition, and reference areas, and the influence of large-scale PV developments on the local air temperature and humidity was studied based on long-term, multi-point field observation data. The results showed that the overall daytime air temperature in the PV power plant had changed slightly (increased and decreased), while the night-time temperature dropped significantly. Specifically, in spring and summer, the daytime temperature increased slightly, with a maximum increase of 0.34 °C; in autumn and winter, the daytime temperature decreased slightly, with a maximum decrease of 0.26 °C; in all seasons, the night-time temperature decreased, with a maximum decrease of 1.82 °C during the winter night. The relative humidity in the PV power plant generally increased; except for a slight decrease in summer, the daytime and night-time relative humidity in spring, autumn, and winter always increased. The humidification in winter was the most significant, with increases of 5.00% and 4.76% for the transition and reference areas, respectively. The diurnal air temperature and relative humidity ranges in the PV power plant were greater than those outside the PV power plant. The results obtained in this field observation study could serve as a basis for quantitative evaluation of the microclimate effects of large-scale PV development in deserts and provide technical support for guiding the future planning and development of the PV industry. View Full-Text
Keywords: desert area; large-scale photovoltaic power plant; field observation; air temperature; relative humidity desert area; large-scale photovoltaic power plant; field observation; air temperature; relative humidity
►▼ Show Figures 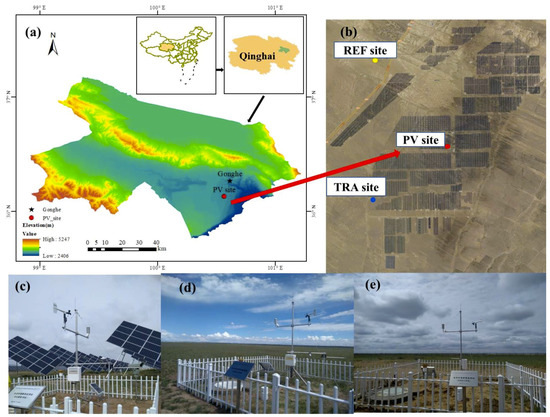