The 2030 Challenge in the Quality of Higher Education: Metacognitive, Motivational and Structural Factors, Predictive of Written Argumentation, for the Dissemination of Sustainable Knowledge
Previous Article in Journal

In order to achieve the objectives of the study, a non-experimental, ex post facto, descriptive and correlational research design was proposed to examine teachers’ training and their experience in relation to child abuse.
In addition, comparisons were made for each of the variables dependent on the research (previous training, detection and intervention in child abuse cases, knowledge, ability to act and aspects of improvement in child abuse cases) depending on the teachers’ level (trainee teacher/in-service teacher), which is considered as the independent variable of the study.
IBM SPSS STATISTICS version 22 was used to analyze the data.

The study sample consisted of 224 participants, of whom 144 were teachers in training and 80 were teachers in service. All these teachers worked in the Early Childhood Education or Primary Education stages.
Table 1 shows the participants’ classified by gender, occupation and the educational stage to which they belong.
The sample contains participants from various Spanish Autonomous Communities (Galicia, Asturias, La Rioja, Catalonia, Castile and Leon, Community of Madrid, Castile-La Mancha, Extremadura, Andalusia and Balearic Islands), making it a fairly representative sample of the country.

For the collection of data, an ad hoc questionnaire entitled “Assessment instrument on child abuse to evaluate teachers” was developed. The items in the questionnaire were produced by experts and are based on the scientific literature on child abuse. They are mainly based on the teachers’ guide “Detection and prevention of child abuse from an educational perspective” prepared by the children’s ombudsman of the Community of Madrid [15], the Children’s Observatory document “Child Abuse: Detection, Notification and Registration of Cases” [5] and the ANAR Foundation document “Study: Evolution of violence against children in Spain according to victims” [28].
Regarding the structure of the instrument, it was divided into four parts:

2.3.1. Information from the Participant

In the first part of the questionnaire, sociodemographic data on the participants were collected through different questions that allow us to know age, gender, occupation (teacher in training or in service), the province in which he or she studies or works, years of experience, educational stage (Early Childhood Education/Primary Education), training received on child abuse detection and intervention, perception and/or intervention in any cases and the type intervention carried out.

The second part of the instrument (Scale of knowledge of child abuse) is composed of a 10-item scale with True/False/Don’t know answers to analyze teachers’ knowledge of child abuse (Appendix A). These are different statements related to assumptions or myths and real data about child abuse, so the main objective was to obtain a general score of teachers’ knowledge about child abuse. The score is on a scale from 0 to 10, because the correct option has been scored with a value of 1 and the incorrect and unknown option (Don’t know) with a value of 0. The scale’s correct answers have been marked in the table presented in Appendix A, five of the items being true and five false.

The third part of the questionnaire (Scale of action against child abuse) consists of a 10-item scale whose response options are also True/False/Don’t know, but in this case the teachers’ capacity to detect, report and intervene in cases of child abuse was evaluated (Appendix B). For this purpose, different statements were shown about how the school or teachers should act positively in relation to child abuse. Participants indicated if the items are affirmative, negative or unknown. In this section we also obtained a score on a scale from 0 to 10 since the correct options were scored with a value of 1 and the incorrect or unknown (Don’t know) options with a value of 0. The correct and incorrect answers can also be checked in the table in Appendix B, with five true items and five false.

The last part of the instrument (Scale of aspects for improvement in child abuse) consists of a scale of five items related to improvement on aspects of child abuse that could be raised and carried out by teachers in the educational area (Appendix C). These items are evaluated through a Likert scale with four response options that the participants could select according to their degree of agreement with the proposal: 0—Completely disagree, 1—Kind of agree, 2—Quite agree, 3—Strongly agree. Therefore, with this scale, participants could get a score between 0 and 15.
The questionnaire ends with an open question (“In a personal way, describe how important you think training and knowledge about familial child abuse is for teachers today. Is it a relevant issue in teaching? Is it something unknown in this profession?), where teachers could express their opinion on whether child abuse by families is a relevant issue in education, even if teachers are not aware of cases.
In order to calculate the reliability of the questionnaire, the Cronbach alpha coefficient was calculated for each of the scales of the instrument: Scale of knowledge of child abuse α = 0.67, Scale of action against child abuse α = 0.69 and Scale of aspects for improvement in child abuse α = 0.77. These results lead us to conclude that they are adequate scales with acceptable reliability [29] for assessing teachers’ knowledge and action related to, and aspects for improvement in, child abuse.
The questionnaire was administered online to teachers in various locations in Spain through a Google form that was distributed by e-mail or WhatsApp.
We were always at the disposal of the participants to answer questions and to ensure that the questionnaire was answered as honestly as possible, stressing that it was an anonymous survey and that the information would not be used for any purpose other than research.

The results of the questionnaire on child abuse by teachers are presented below. To this end, this section shows a comparison between in-service and in-training teachers regarding previous training, the detection and intervention in child abuses cases, and the knowledge, the action and the improvement aspects in the face of child abuse. Finally, the three variables’ data (knowledge, action and improvement aspects) are analyzed together to check if there is a relationship between them.

3.1. Results of the Previous Training in Child Abuse among Teachers

3.2. Results of Detection and Action in Child Abuse’s Cases among Teachers

3.3. Results of Knowledge and Action against Child Abuse among Teachers

3.4. Results of Aspects for Improvement in the Face of Child Abuse among Teachers

In order to evaluate teachers’ intentions to improve in relation to child abuse, a 5-item scale was proposed, scored from 0 to 3. Therefore, the score that teachers can obtain on this scale is between 0 and 15 points.
Figure 4 shows the average scores presented by teachers in training and teachers in service with reference to the issues raised relating to aspects for improvement in child abuse. These results show that the trainee teachers’ average (M = 13.46) is higher than the in-service teachers’ average (M = 12.89). However, both figures are quite high and show a high level of interest among teachers in making improvements in relation to child abuse.
Through the Student t-Test for independent samples, it was possible to verify in Table 4 that there are statistically significant differences (t(143,17) = 2.01, p < 0.05, r = 0.16) in the aspects for improvement in relation to child abuse between teachers in training (M = 13.46, ST = 1.84) and teachers in service (M = 12.89, ST = 2.15), with the former presenting a higher level of interest.
Finally, teachers were asked about the relevance and lack of awareness of child abuse in education through the following question: “In a personal way, describe how important you think training and knowledge about familial child abuse is for teachers today. Is it a relevant issue in teaching? Is it something unknown in this profession?” With this, the aim was to check the participants’ views on how child abuse is currently affecting teaching and whether it is given enough importance.
The different points of view expressed by teachers in training and teachers in service are outlined below. Among the trainee teachers’ answers we can highlight the following:

Among the teachers in service, the vast majority point out that it is difficult to address this issue and that training could be improved. We can highlight their following answers:

As can be seen, many of the teachers agree that it is a very important issue, yet unknown in the educational field, and they show a high level of interest in better training. Unfortunately, a great number of participants report that they are not well prepared to detect and act in those situations.

3.5. Results of the Relationship between Knowledge, Action and Aspects for Improvement in Child Abuse among Teachers

All authors participated in data collection. V.S. and M.G.-S. analyzed the data and contributed to data interpretation of statistical analysis. M.G.-S. wrote the paper with significant input from V.S. All authors have read and agreed to the published version of the manuscript. 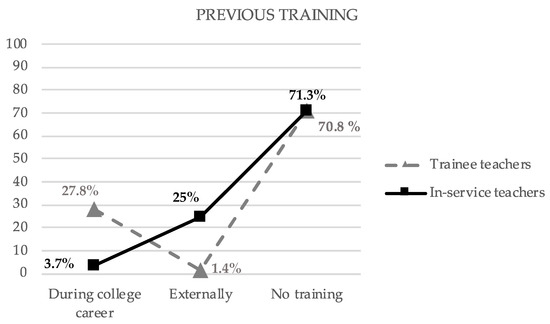 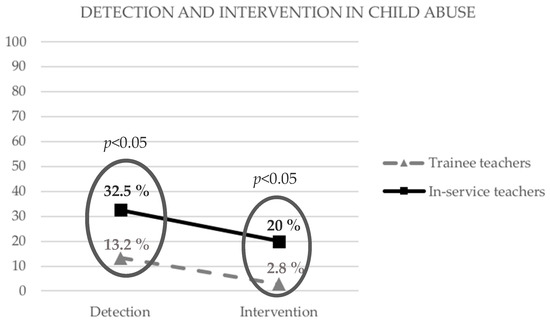 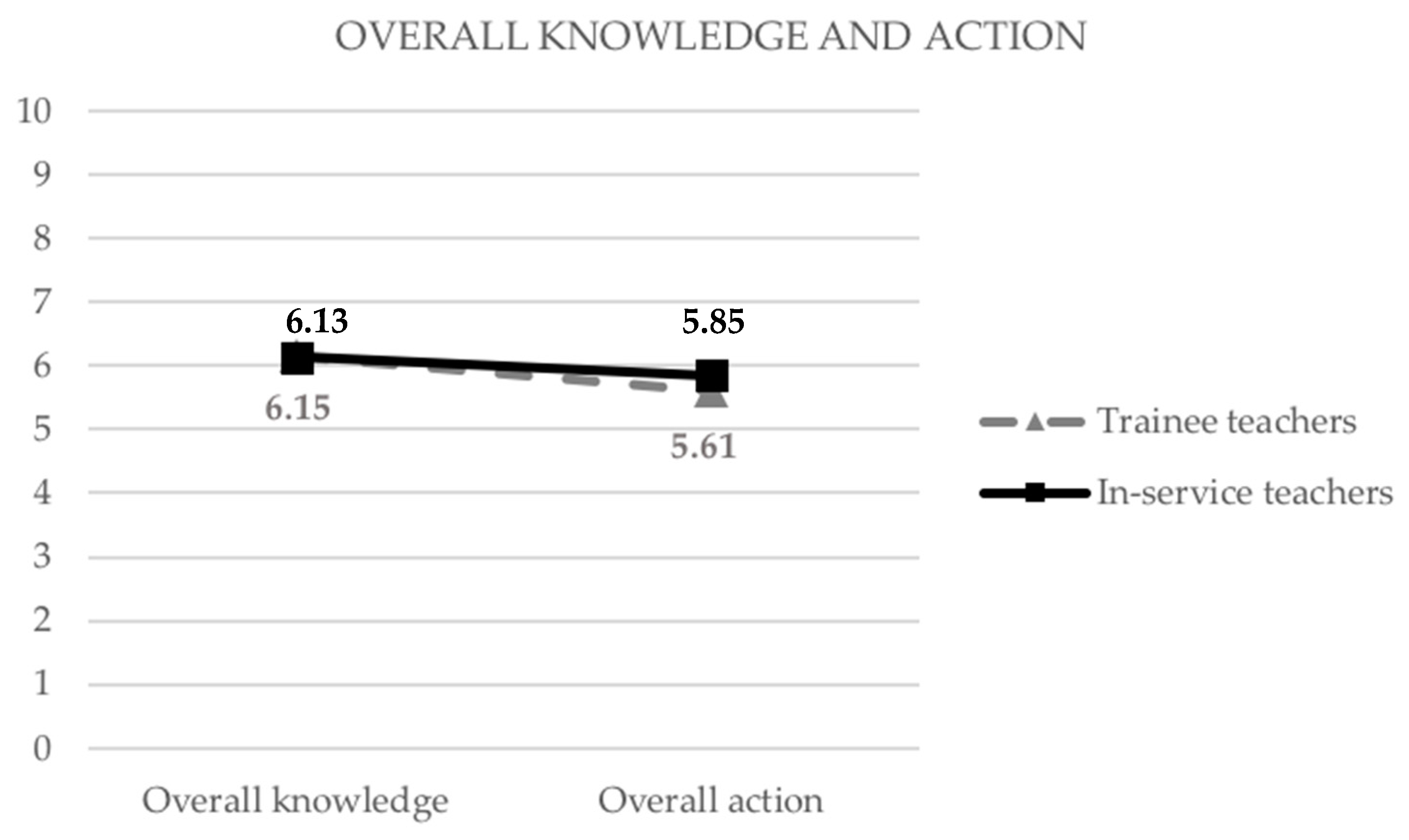 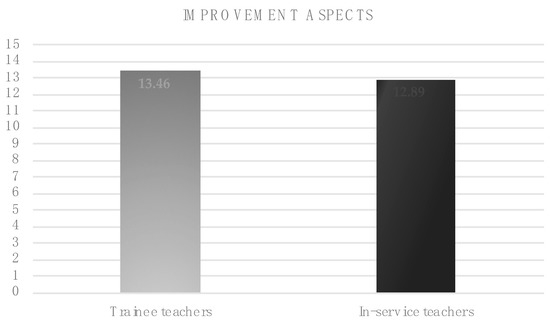 Table 5. Pearson’s Correlation.
Table 5. Pearson’s Correlation.
Note: Pearson’s Correlation of teachers’ global knowledge, global action and aspects for improvement in child abuse, * p < 0.01; ** p < 0.001.
© 2020 by the authors. Licensee MDPI, Basel, Switzerland. This article is an open access article distributed under the terms and conditions of the Creative Commons Attribution (CC BY) license (http://creativecommons.org/licenses/by/4.0/).
We use cookies on our website to ensure you get the best experience. Read more about our cookies here.
Accept
We have just recently launched a new version of our website. Help us to further improve by taking part in this short 5 minute survey here. here.
Never show this again