Climate-Related Prudential Risks in the Banking Sector: A Review of the Emerging Regulatory and Supervisory Practices
Previous Article in Special Issue

Swidden or shifting cultivation is a widespread yet controversial land-use in the tropical forest–agriculture frontier. In recent years, the extent of land under swidden and the people who rely on it for subsistence and income have declined. We report swidden land-use changes in two central hill districts of Nepal by indigenous Chepang communities—a stronghold of swidden cultivation in mountainous Nepal. Despite a common trend of swidden decline, as in other parts of South and Southeast Asia, we found that swidden is important in the life and livelihoods of smallholder rural Chepang farmers in the area. Swidden cultivation was found to be more important to farmers with limited off-farm opportunities and in areas where alternative land-uses were scarce. We discuss biophysical, socio-economic, institutional, and other key drivers affecting farmers’ decision to shift away from or continue with swidden in the area. Using linear mixed effect models, we also examined households’ attributes that may expedite swidden decisions in the area. Our study recommends greater access to alternative land-use(s) and other income-generating options for the wellbeing of smallholder indigenous Chepang farmers, as well as the sustainability of this age-old land-use practice. View Full-Text
Keywords: shifting cultivation; sedentary agriculture; smallholder; food security; rural livelihood; climate change shifting cultivation; sedentary agriculture; smallholder; food security; rural livelihood; climate change
►▼ Show Figures 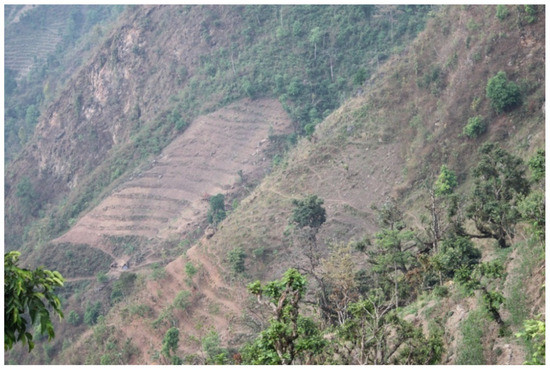