Bioeconomy Transitions through the Lens of Coupled Social-Ecological Systems: A Framework for Place-Based Responsibility in the Global Resource System
Previous Article in Journal

This research aimed to examine the willingness to pay (WTP) of the young generation (the age group from 18 to 29) for the participatory solutions and actions on fine particulate matter (PM2.5) pollution control and abatement in Daegu, Korea, and Beijing, China. This study found out that Korean respondents and Chinese respondents shared a wide range of similarities, both in terms of socio-demographic characters like age, family size, and house/apartment ownership, as well as a number of perceptions related to environmental and social responsibilities. Around one-third of the Korean respondents and one-fifth of the Chinese respondents expressed negative WTP due to primary reasons such as lack of trust in the effectiveness of PM2.5 control measures (Korea) and limitation of budget (China). The mean estimated values of WTP with and without explanatory variables in Korea were merely slightly higher than those in China. The mean WTP without control variables in Korea was 11,882.97 KRW/month (10.61 USD/month) and the one in China was 65.09 CNY/month (9.48 USD/month). The mean WTP with explanatory variables for Daegu, Korea, was KRW 11,982.33 (USD 10.70) per person per month, and the one for Beijing, China, was CNY 64.84 (USD 9.40) per person per month. The annual total WTP for Daegu, Korea, was assessed around KRW 47572 million (USD 42.45 million), whereas the estimated total WTP for Beijing, China, was around CNY 3260.14 million (USD 474.94 million) per year. Based on the results and the findings, this study proposes to further strengthen the comprehensive cooperation between China and Korea in the field of air quality improvement, with a particular focus on PM2.5 control and abatement and cooperation in academic circles and among the general public. View Full-Text
Keywords: willingness to pay; WTP; contingent valuation method; CVM; fine particulate matter; PM2.5 willingness to pay; WTP; contingent valuation method; CVM; fine particulate matter; PM2.5
►▼ Show Figures 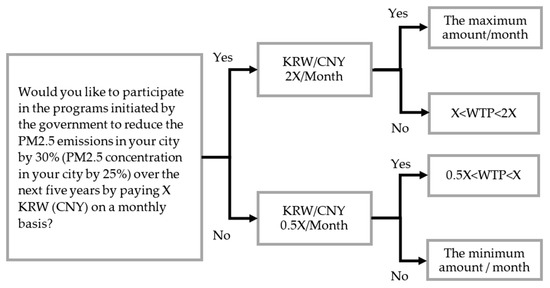