How does the Ecological Well-Being of Urban and Rural Residents Change with Rural-Urban Land Conversion? The Case of Hubei, China
Previous Article in Journal

The emissions of carbon dioxide generated by urban traffic is generally reflected by urban size. In order to discuss the traffic volume generated in developed buildings and road crossings in a single urban block, with the metropolitan area in Taichung, Taiwan as an example, this study calculates the mutual relationship between the carbon dioxide generated by the traffic volume and building development scale, in order to research energy consumption and relevance. In this research, the entire-day traffic volume of an important road crossing is subject to statistical analysis to obtain the prediction formula of total passenger car units in the main road crossing within 24 h. Then, the total CO2 emissions generated by the traffic volume in the entire year is calculated according to the investigation data of peak traffic hours within 16 blocks and the influential factors of the development scale of 95 buildings are counted. Finally, this research found that there is a passenger car unit of 4.72 generated in each square meter of land in the urban block every day, 0.99 in each square meter of floor area in the building and the average annual total CO2 emissions of each passenger car unit is 41.4 kgCO2/yr. In addition, the basic information of an integrated road system and traffic volume is used to present a readable urban traffic hot map, which can calculate a distribution map of passenger car units within one day in Taichung. This research unit can be used to forecast the development scale of various buildings in future urban blocks, in order to provide an effective approach to estimate the carbon dioxide generated by the traffic volume. View Full-Text
Keywords: CO2 emissions; transport; urban block; urban design CO2 emissions; transport; urban block; urban design
►▼ Show Figures 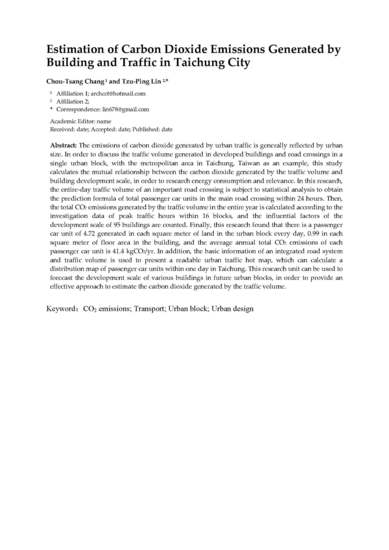