Simpson-Golabi-Behmel syndrome (SGBS) is a rare x-linked overgrowth syndrome with distinct clinical features, which is difficult to diagnose prenatally. We report the diagnosis of SGBS in dichorionic-diamniotic twin pregnancies in the first trimester by ultrasound and genetic testing. The affected fetus developed polyhydramnios and the cervical length of the mother decreased significantly. To save the unaffected twin, a selective feticide of the affected fetus was performed. Finally, the patient underwent preterm caesarean section due to premature rupture of membranes in the dead twin, and also intrauterine infection. While SGBS has been reported, this was the first case in a multiple pregnancy, with possible consequences for the healthy twin. In conclusion, SGBS is a rare condition, which should be considered in the differential diagnosis of prenatal overgrowth syndromes and associated malformation. View Full-Text
Keywords: prenatal diagnosis; exome sequencing; twin pregnancy; Simpson-Golabi-Behmel-syndrome prenatal diagnosis; exome sequencing; twin pregnancy; Simpson-Golabi-Behmel-syndrome
►▼ Show Figures 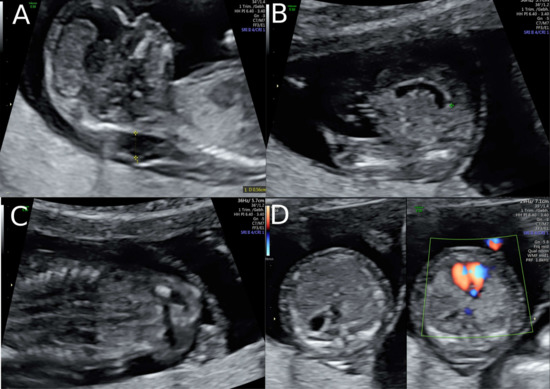