What Does It “Mean”? A Review of Interpreting and Calculating Different Types of Means and Standard Deviations

The aim of this study was to develop a novel folate receptor-targeted drug delivery system for retinoblastoma cells using a promising anticancer agent, curcumin-difluorinated (CDF), loaded in polymeric micelles. Folic acid was used as a targeting moiety to enhance the targeting and bioavailability of CDF. For this purpose, amphiphilic poly(styrene-co-maleic acid)-conjugated-folic acid (SMA-FA) was synthesized and utilized to improve the aqueous solubility of a highly hydrophobic, but very potent anticancer compound, CDF, and its targeted delivery to folate overexpressing cancers. The SMA-FA conjugate was first synthesized and characterized by 1H NMR, FTIR and DSC. Furthermore, the chromatographic condition (HPLC) for estimating CDF was determined and validated. The formulation was optimized to achieve maximum entrapment of CDF. The particle size of the micelles was measured and confirmed by dynamic light scattering (DLS) and transmission electron microscopy (TEM). Cytotoxicity studies were conducted on (Y-79 and WERI-RB) retinoblastoma cells. Results showed that the solubility of CDF could be increased with the newly-synthesized polymer, and the entrapment efficiency was >85%. The drug-loaded nanomicelles exhibited an appropriate size of <200 nm and a narrow size distribution. The formulation did not show any adverse cytotoxicity on a human retinal pigment epithelial cell (ARPE-19), indicating its safety. However, it showed significant cell killing activity in both Y-79 and WERI-RB retinoblastoma cell lines, indicating its potency in killing cancer cells. In conclusion, the folic acid-conjugated SMA loaded with CDF showed promising potential with high safety and pronounced anticancer activity on the tested retinoblastoma cell lines. The newly-formulated targeted nanomicelles thus could be a viable option as an alternative approach to current retinoblastoma therapies. View Full-Text
Keywords: retinoblastoma; Y-79; WERI-RB; folate-receptor targeting; nanomicelles; 3,4-difluorobenzylidene curcumin (CDF); fluorocurcumin; targeted drug delivery retinoblastoma; Y-79; WERI-RB; folate-receptor targeting; nanomicelles; 3,4-difluorobenzylidene curcumin (CDF); fluorocurcumin; targeted drug delivery
►▼ Show Figures 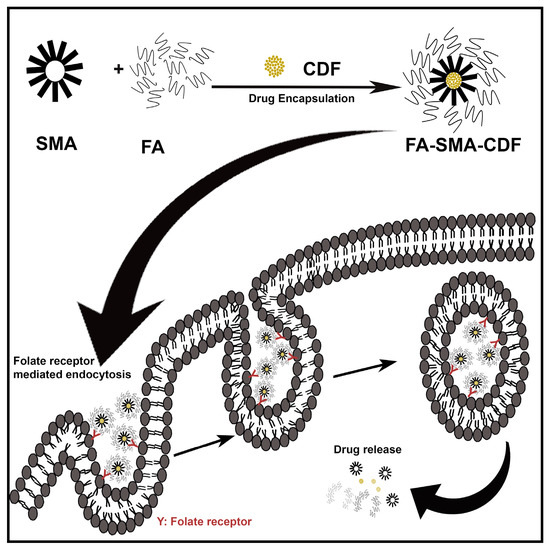