HER2-Specific Pseudomonas Exotoxin A PE25 Based Fusions: Influence of Targeting Domain on Target Binding, Toxicity, and In Vivo Biodistribution
Next Article in Special Issue

The ability of viruses to introduce genetic material into cells can be usefully exploited in a variety of therapies and also vaccination. Encapsulating viruses to limit inactivation by the immune system before reaching the desired target and allowing for controlled release is a promising strategy of delivery. Conventional encapsulation methods, however, can significantly reduce infectivity. The aim of this study was to investigate electrospraying as an alternative encapsulation technique. Two commonly used therapeutic viruses, adenovirus (Ad) and modified vaccinia Ankara (MVA), were selected. First, solutions containing the viruses were electrosprayed in a single needle configuration at increasing voltages to examine the impact of the electric field. Second, the effect of exposing the viruses to pure organic solvents was investigated and compared to that occurring during coaxial electrospraying. Infectivity was determined by measuring the luminescence produced from lysed A549 cells after incubation with treated virus. Neither Ad nor MVA exhibited any significant loss in infectivity when electrosprayed within the range of electrospraying parameters relevant for encapsulation. A significant decrease in infectivity was only observed when MVA was electrosprayed at the highest voltage, 24 kV, and when MVA and Ad were exposed to selected pure organic solvents. Thus, it was concluded that electrospraying would be a viable method for virus encapsulation. View Full-Text
Keywords: modified vaccinia Ankara; Adenovirus; vaccine delivery; encapsulation; electroporation modified vaccinia Ankara; Adenovirus; vaccine delivery; encapsulation; electroporation
►▼ Show Figures 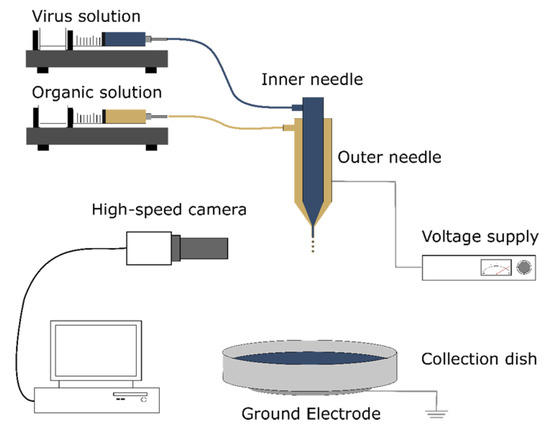 Sanders, T., II; Milicic, A.; Stride, E. Investigating the Effect of Encapsulation Processing Parameters on the Viability of Therapeutic Viruses in Electrospraying. Pharmaceutics 2020, 12, 388.


Sanders T, II, Milicic A, Stride E. Investigating the Effect of Encapsulation Processing Parameters on the Viability of Therapeutic Viruses in Electrospraying. Pharmaceutics. 2020; 12(4):388.