When ingesting a drug on its own or injecting it directly into tissue, its concentration increases immediately within the body, which often exacerbates the side effects and increases its toxicity. To solve this problem, we synthesized the thermally reactive polymer poly(N-isopropylacrylamide) (PNIPAM) using reversible addition–fragmentation chain transfer (RAFT) polymerization and prepared nanocarriers by binding PNIPAM to gold nanorods (GRs), with the anticancer agent doxorubicin (DOX) used as a model drug. PNIPAM changes from hydrophilic to hydrophobic at temperatures above its lower critical solution temperature, which represents a coil-to-globule volume phase transition. Because GRs absorb near-infrared (NIR) laser light and emit energy, PNIPAM aggregation occurs when the synthesized PNIPAM/GR are subjected to an NIR laser, and the temperature of the GRs rises. Using this principle, DOX was combined with the PNIPAM/GR complex, and the resulting anticancer effects with and without laser treatment were observed in Hela and MDA-MB-231 cells. In our proposed complex, the GR binding rate of PNIPAM reached 20% and the DOX binding rate reached 15%. The release profile of the drug following laser irradiation was determined using a drug release test and confocal microscopy imaging. It was subsequently confirmed that the release of the drug is higher at higher temperatures, especially with laser treatment. The proposed combination of temperature-reactive polymers and gold nanostructures shows promise for future research into controlled drug release. View Full-Text
Keywords: poly(N-isopropylacrylamide); gold nanorod; doxorubicin; drug delivery; NIR laser poly(N-isopropylacrylamide); gold nanorod; doxorubicin; drug delivery; NIR laser
►▼ Show Figures 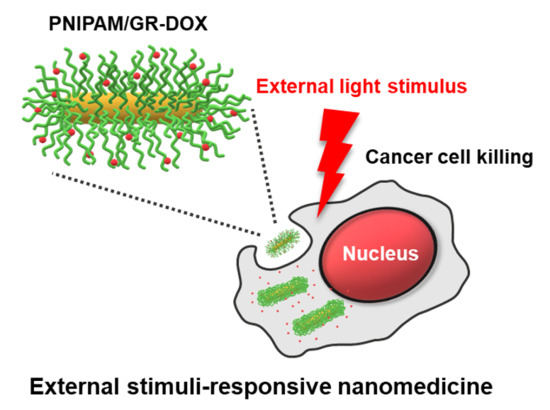