Focused ultrasound (FUS) coupled with microbubbles (MB) has been found to be a promising approach to disrupt the blood-brain barrier (BBB). However, how this disruption affects drug transport remains unclear. In this study, drug transport in combination therapy of liposomes and FUS-MB-induced BBB disruption (BBBD) was investigated based on a multiphysics model. A realistic 3D brain tumour model extracted from MR images was applied. The results demonstrated the advantage of liposomes compared to free doxorubicin injection in further improving treatment when the BBB is opened under the same delivery conditions using burst sonication. This improvement was mainly due to the BBBD-enhanced transvascular transport of free doxorubicin and the sustainable supply of the drug by long-circulating liposomes. Treatment efficacy can be improved in different ways. Disrupting the BBB simultaneously with liposome bolus injection enables more free drug molecules to cross the vessel wall, while prolonging the BBBD duration could accelerate liposome transvascular transport for more effective drug release. However, the drug release rate needs to be well controlled to balance the trade-off among drug release, transvascular exchange and elimination. The results obtained in this study could provide suggestions for the future optimisation of this FUS-MB–liposome combination therapy against brain cancer. View Full-Text
Keywords: blood-brain barrier disruption; brain tumour; drug transport; focused ultrasound; liposome-mediated delivery; mathematical model blood-brain barrier disruption; brain tumour; drug transport; focused ultrasound; liposome-mediated delivery; mathematical model
►▼ Show Figures 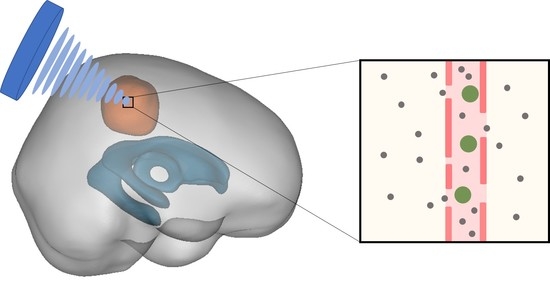