Cell-penetrating peptides (CPPs) are commonly used substances enhancing the cellular uptake of various cargoes that do not easily cross the cellular membrane. CPPs can be either covalently bound directly to the cargo or they can be attached to a transporting system such as a polymer carrier together with the cargo. In this work, several CPP–polymer conjugates based on copolymers of N-(2-hydroxypropyl)methacrylamide (pHPMA) with HIV-1 Tat peptide (TAT), a minimal sequence of penetratin (PEN), IRS-tag (RYIRS), and PTD4 peptide, and the two short hydrophobic peptides VPMLK and PFVYLI were prepared and characterized. Moreover, the biological efficacy of fluorescently labeled polymer carriers decorated with various CPPs was compared. The experiments revealed that the TAT–polymer conjugate and the PEN–polymer conjugate were internalized about 40 times and 15 times more efficiently than the control polymer, respectively. Incorporation of dodeca(ethylene glycol) spacer improved the cell penetration of both studied polymer–peptide conjugates compared to the corresponding spacer-free polymer conjugates, while the shorter tetra(ethylene glycol) spacer improved only the penetration of the TAT conjugate but it did not improve the penetration of the PEN conjugate. Finally, a significantly improved cytotoxic effect of the polymer conjugate containing anticancer drug pirarubicin and TAT attached via a dodeca(ethylene glycol) was observed when compared with the analogous polymer–pirarubicin conjugate without TAT. View Full-Text
Keywords: cell-penetrating peptides; polymer carriers; delivery systems; HPMA copolymers; cancerostatics; diagnostics cell-penetrating peptides; polymer carriers; delivery systems; HPMA copolymers; cancerostatics; diagnostics
►▼ Show Figures 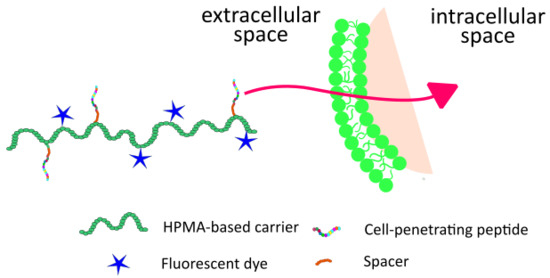